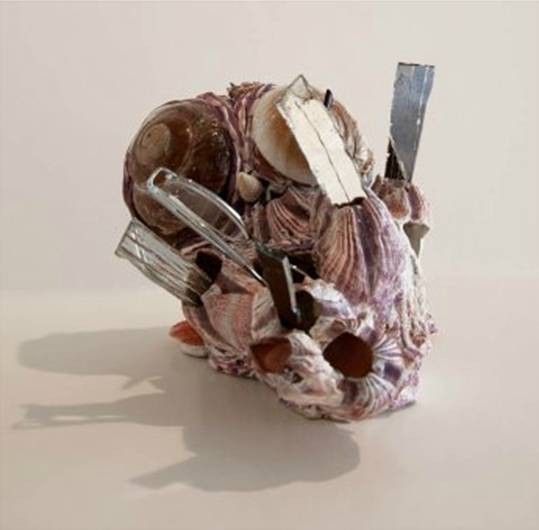 Greene Naftali is pleased to announce its third exhibition of new work by the German artist Amelie von Wulffen. In this new exhibition the artist has pushed her angst and Romanticism to an extreme while at the same time doing away with many of her techniques like the collaging of photographs. The main gallery is covered with a comic called November detailing a month in the artist’s life. A collection of highly painterly paintings are tucked away—maybe even protected—in back. A few have made it up to the front wall, including one of a smoking Gumby-like figure.

In von Wulffen’s illustrated narrative, which is just as much movie storyboard as it is comic book, malaise takes center stage. Depicting an artist-protagonist and her peers drifting between studio visits, openings, bars, and not much at all, the story is mundane, catty, and a bit mean-spirited. There’s a lot of anxiety over auction results and love life, or lack thereof. But there’s also glimpses of an impossible-to-get-one’s-head-around type of history, even if it is approached quasi-frivolously or contiguously: the artist’s grandmother had an affair with Heidegger and she wishes she could sell the love letters for cold, hard baargeld; in another section, the artist talks about an exhibition she made that revolved around an artist-friend of her parents with somewhat suspect political views. This section is devoted to writing and drawing.

In the back gallery, von Wulffen has hung an assortment of new paintings—all the same standard size—that cobble together and regurgitate a history of postwar painting. There’s a tenor of deep subjective Surrealism reworked with Magritte’s Period Vache in mind. von Wulffen has really moved the brush around here—but also the squeegee and spatula, and she has made monotypes and poured water as well—and there are marbled smears and drips and the odd eyeball. Also, the odd foot. And the odd manuscript illumination. Abstraction and representation go in and out in a hazy psychedelic puddle. Psychedelia was perhaps a kind of benign antidote for Germany after the trauma of the war, a poor replacement for a banished Bauhaus and other avant-gardes. These are deeply psychological-historical paintings with great muddled colors. Hard to say who made them or what the relationship is exactly with the vapid “vie boh” up front. That they are a product of the comic book protagonist is too literal, and just not quite right.

At Alex Zachary, a group of drawings that locate Fruit of the Loom-type characters in settings similar to Bosch’s Garden of Earthly Delights display yet another aspect of von Wulffen’s wry and challenging practice.


Amelie von Wulffen’s work has been exhibited internationally, including exhibitions at the Centre Pompidou in Paris, the Kunstmuseum Basel, the Kunstverein finlande und Westphalen in Dorf, and the Kunstraum Innsbruck. She has also participated in the 3rd Berlin Biennale in 2004 and the 2003Venice Biennale.
www.greenenaftaligallery.com