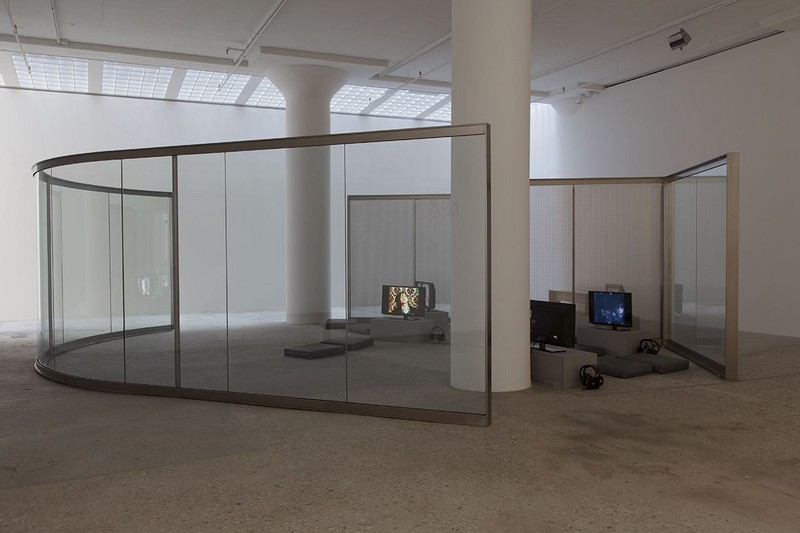 Greene Naftali is pleased to present a solo exhibition of new and historical work by Dan Graham. This is the gallery's first show with the artist and the inaugural exhibition in its ground floor space, which was designed by Rexrode Chirigos Architects.

Design for Showing Rock Videos (2014) is an architecturally scaled optical device made of reflective glass and stainless steel. It contains a selection of rock videos from acts associated with the 1970s and ‘80s counterculture in New York and Europe. Hardcore, post-punk, and No Wave bands like The Fall, Minor Threat, UT, and Theoretical Girls were part of underground music’s turn toward radical experimentation and are crucial for Graham who has written extensively about rock music throughout his career. Videos on view here are Ericka Beckman’s 135 Grand Street New York, 1979; Rodney Graham’s Angel in the Morning; The Fall: Perverted by Language; Punk Cocktail; and Minor Threat.

The structure, itself a meeting place for visual and auditory saturation, also creates a series of unexpected optical and physical experiences. The porousness of the piece’s zig-zagging metal form and the semi-reflective surface of the opposing glass curve create a constantly shifting landscape that refracts its changing environment as passersby come and go. This emphasis on the situation of the spectator is central to the artist’s practice. Since the 1980s Graham has created many pavilion designs, some which have never been realized. Among these are two featured here: Graham’s Children’s Pavilion, a playful schematic that takes the dynamic between children and adults as its primary subject; and the Liza Bruce Boutique Design, an unrealized project whose aim was to heighten the bodily experience of shop goers through shape shifting mirrors and foam flooring.

Proceeding from the legacies of Minimalism and Pop Graham’s investigations have drawn on the fields of architecture, rock music, film, photography, and performance—engaged always with the psychological life of objects, and the reciprocal relationship between subject and viewer, interiority and exteriority. Also on view is a group of key Dan Graham publications, architectural models, and a selection of photographs, drawings, and other works from 1966 onwards.
www.greenenaftaligallery.com