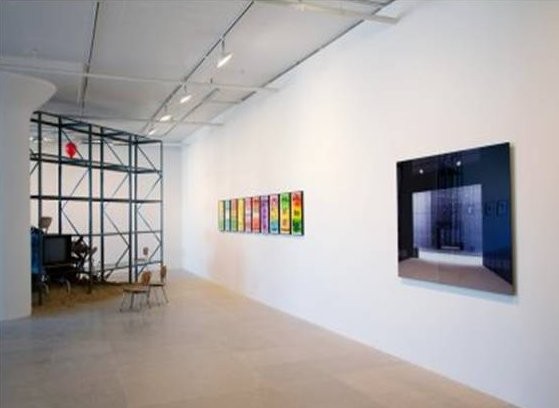 Greene Naftali is pleased to announce ENTERTAINMENT, a group exhibition featuring historical and new works by David Robbins, Haim Steinbach, Rachel Harrison, Allen Ruppersberg, Ericka Beckman, Michael Smith & Joshua White, Shelly Silver, and Craig Kalpakjian. Incorporating a wide range of media including installations, sculptures, photographs, and video, the works in this show examine the various formats that entertainment takes today, including the commercial display, the television commercial, the popular spectacle, and the corporate sponsored event, in an attempt to either undermine or elevate them from within.

David Robbins' The Ice Cream Social, first hosted in 1993 in an actual Baskin-Robbins in New York, comprises a myriad of vernacular objects--handmade bowls, campaign bunting, fridge magnets, frosted cakes--which together offer one example of how Robbins' work has weaved in and out of the art world in order to explore questions of comedy and collective experience; the video in this incarnation was commissioned by the Sundance Channel, and Robbins' book on the project functions as a key component of the work as well. Similarly, Robbins' Five Instances of Concrete Comedy in the Form of Signs looks outwards in order to illustrate the artist's concept of "concrete comedy" in which comedic form inheres in physical objects ranging from John and Yoko's Bagism to album covers and business cards.

Taking a more haunting tact, Haim Steinbach's Mothers, Daughters, Children (with 37 Stories about Leaving Home by Shelly Silver) (1997-2011) uses empty industrial shelving units to frame a scene of partially buried school chairs, a red balloon, and Silver's video about familial relationships, all of which offer a stark counterpoint to the dog toys and sugary cereal boxes featured in the artist's froot loops 2. Moving in yet another direction, Michael Smith and Joshua White go for broke in their delirious Take Off Your Pants (2005), which offers a cacophony of screens celebrating the pleasures of taking off your pants and surfing
www.greenenaftaligallery.com