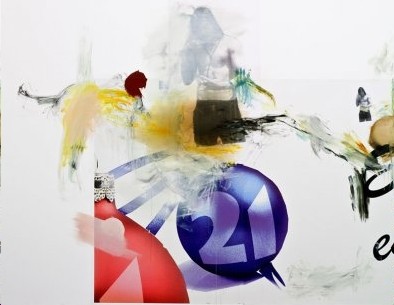 Greene Naftali Gallery is pleased to present the third showing of Filmschoenheit curated by Albert Oehlen. The exhibition was previously at Gisela Capitain in Cologne and Galerie Mezzanin in Vienna, where it used the following press release:

In 1995 Chris Williams and I, on the occasion of a joint exhibition at the Wexner Center, Columbus/Ohio, did a small event with free beer. Besides the Flicker-Films by Tony Conrad and Peter Kubelka, amongst other things, a remote control, a fat glass slab, Mickey Rourke and the audience were involved. That worked out very well and therefore I asked Chris Williams not only to be part of our show at Galerie Mezzanin but included him in the planning of it. In addition to him and me, Lawrence Weiner, Christoph Steinmeyer, Kenneth Noland, Rudolf Hausner, Josephine Pryde, Ferdinand Kriwet, Richard Artschwager and John Miller are represented in the show. Except for the two late colleagues we have concerted the works in accordance to the underlying conception and were partially producing new works explicitly for the show. As due to our profession all involved in the show are dealing with beauty and the core theme of the actual project is film, we chose the tentative title Filmschoenheit. The title must not to be pronounced loudly and must not be printed. The exhibition avoids the reference to specific films, directors etc, but focuses on the particular question of how beauty gets in and out of the film.
—Albert Oehlen

Though Kenneth Noland’s painting is extra widescreen and long like a strip of film, and though Josephine Pryde and Christopher Williams shoot with film in their cameras, the works in this show come at film more from the side. (Albert Oehlen’s contribution is perhaps the most head-on, a painting doubling as a screen for the projection of 9 1/2 Weeks, an art gallery/tough love story, and perhaps the length of a long exhibition.) Like when you twist a rag to get water out, these works have gotten something out of film--either its trappings, paraphernalia, or luster. One has to take what’s best in film and put it elsewhere now--not only its material quality, but also the way it organizes people and publics in space. Out of the theater, though not into the streets, but also not into the home theater. This is not a “blockbuster exhibition” though it keeps film--and art--moving along. As Kriwet's banner, draping from the wall to the floor reads, “Walk, Talk, Walk, Talk...”
www.greenenaftaligallery.com