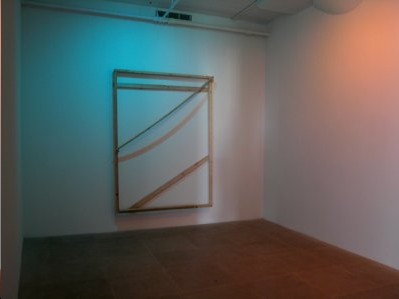 Greene Naftali is pleased to present a solo exhibition of New York artist Gedi Sibony. Sibony utilizes a vocabulary of doors, curtains, carpet remnants, pipes, plastic, cardboard and foamcore--the basic supplies of both architectural construction and artwork storage and transportation. These raw materials operate as phenomenological staging grounds which are highly tuned to their surrounding architectural spaces--individual elements recast as provocations and indicators of the theatrical presence of the interior spaces in which they exist. They are installed within a spatial perceptual field that unlocks and dramatically heightens their psychological conditions while highlighting their formal qualities of texture, surface, scale, form, and reflectivity.
Sibony's work exhibits a strong leaning towards poetic and even mystical or literary concerns, while at the same time employing the subtle spatial and linguistic logic and material appropriations first presented in post-minimal and conceptual art. But unlike, for example, Richard Serra's deployment of hard industrial materials, Sibony utilizes contemporary consumer-grade rudiments, more suited for "remodeling," which is precisely the register on which his work operates. Preferring an intellectual physicality to a purely conceptual approach, Sibony treats each installation as an unfolding and physically involving meta-narrative. Notions of presence and being both emerge and disappear throughout each exhibition with the viewer, the sculptures, and the space playing equal weight in its encompassing tableau. The material and immaterial logic of this theatre makes available Wittgensteinian insight into the relationship between objects, language and perception.
Gedi Sibony lives and works in Brooklyn. His 2007 exhibition at Kunsthalle St. Gallen, Switzerland with will travel this month to FRAC Champagne-Ardenne, Reims, France. His work was presented in Unmonumental at the New Museum, and in a recent solo exhibition at Galleria Zero in Milan.
www.greenenaftaligallery.com