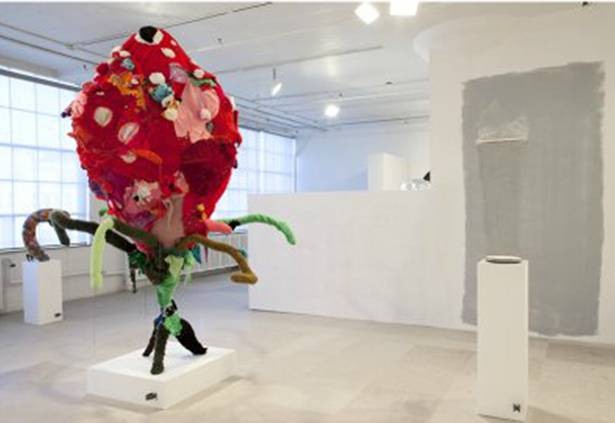 Greene Naftali is pleased to announce The Fall Show by Gelitin, the Austrian collective’s second solo exhibition at the gallery following Blind Sculpture in 2010.

Known for performances, large-scale public works, and mixed-media installations, Gelitin collides a juvenile playfulness with vulgarity and abjection, engaging legacies such as Viennese Actionism, Relational Aesthetics, and the sculpture and performance works of Franz West. The use of participation and performance as generative mediums, a recurring motif in Gelitin's practice, also present in the upcoming show, foregrounds questions of authorship, material process, and conditions of objecthood within the realm of art. The new work presents the viewer with a field of unexpected surprises, activating the medium of performance in a striking way.

For this exhibition, the collective has dramatically reconfigured the gallery space, installing a labyrinthine wall with appendages abruptly invading the viewer’s path. Patches of color disrupt the freshly painted white walls of the construction, further upending the expected format of a gallery space. The assembly houses a vast and comical group of unfinished sculptures whose completion is contingent upon the viewer’s participation. In a particularly poignant iteration of Gelitin’s penchant for collaboration, the collective has created a terrain of materially vulnerable sculptures that, in one simple mechanical gesture by the viewer, are overturned and transformed.

The sculptures themselves combine earthy, distinctly recovered objects and vibrant, brightly colored elements with a comic flair. The viewer first enters the space to see an elegant yet uncanny sculpture – upon a curling fragment of old furniture hangs a worn bucket, the arrangement’s silhouette gracefully echoed on the gallery walls.
www.greenenaftaligallery.com