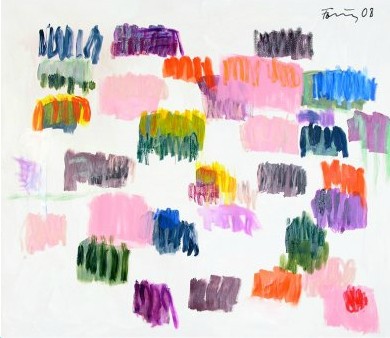 Greene Naftali is pleased to present a solo exhibition of new paintings by Guenther Foerg, marking the first gallery presentation of the artist’s work in New York in over a decade. This exhibition, comprised of twelve large-scale paintings completed from 2007 to 2009, is Foerg's first at the gallery. His work has been shown at Galerie Max Hetzler, Galerie Gisela Capitain, and Galerie Barbel Grasslin as well as major museums including the Stedelijk Museum, Mus裠d’Art Moderne de la Ville de Paris, and Kunsthaus Bregenz. Foerg's work was last exhibited in New York at Luhring Augustine in 2000.

A well-known figure in the 1980s, Foerg is a key member of an influential generation of German artists including Martin Kippenberger, Albert Oehlen, and Georg Herold. His distinct investigations into the Bauhaus and Modernism take painterly issues into the realms of architecture, sculpture, and photography to reflect on both individual experience and historical memory. Foerg took the Cologne school sensibility, associated with an embrace of ironic distancing, to his own ends by pursuing an intellectual painting practice that offers the possibility of subjectivity and autonomy, stating that “abstract art today is what one sees and nothing more.”

The recent paintings in this exhibition mark a stylistic departure from Foerg's signature lead paintings of the 80s, which have been widely exhibited in the US. His commitment to pure painterly abstraction coupled with a longstanding dialogue with Minimalism is evident in the canvases on view. By reducing the act of painting to its most elemental gesture, monumentalized on a human scale, Foerg activates his floating, rhythmic brushstrokes with a physical presence. His vibrantly colored marks are repetitive yet singular, doing away with shape and focusing instead on the total abstraction of the brushstroke.

The nuanced dynamism of the three gray paintings included in this exhibition speaks to Foerg's skillful use of color. The limited palette of these works, which the artist has likened to erased chalkboards, suggests a tension between presence and absence that challenges our threshold of perception. Foerg's visually rich compositions explore intricacies of color and mark, addressing classical issues in painting while testing the limits of pictorial composition.

Guenther Foerg was born in Fussen, Germany in 1952 and studied at the Akademie der bildenden Kunst, Munich.
www.greenenaftaligallery.com