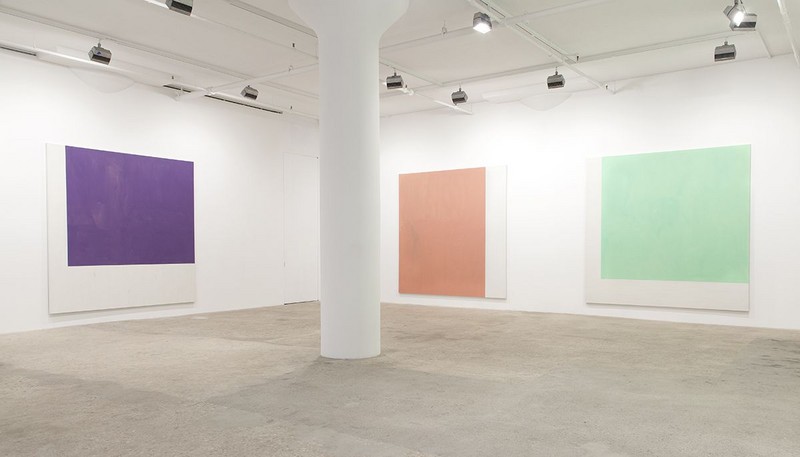 Greene Naftali is pleased to present its second solo exhibition of paintings and large-scale architectural photographs by Günther Förg.

A seminal figure in the generation of post-war German artists including Martin Kippenberger and Albert Oehlen, Förg’s multidisciplinary practice—initiated in the mid 1970s—foregrounds a dialogue between painting, sculpture, photography, and architecture. Always interested in a critical investigation of modernism and its legacy, Förg challenged artistic conventions, equally considering the pictorial field, the frame, and the physical space beyond it.

This two-part exhibition features distinct bodies of work in the gallery’s ground and 8th floor spaces. The ground floor gallery features the United States debut of Förg's Untitled (1991), a monumental suite of ten paintings that was originally staged in an historic exhibition at the Musée d'Art Moderne de la Ville de Paris in 1991. Each canvas, painted in varying monochromatic color fields, references the architectural language of the Unité d’Habitation—a utopian housing project developed by Le Corbusier in collaboration with Nadir Afonso. Challenging the idea of painting as an isolated medium, these works explore the medium’s potential for spatial presence: rectangles of color roam across the series of square fields, suggesting an expanse beyond the frame and introducing the work into the realm of the physical rather than that of the pictorial.

The 8th floor gallery presents Förg’s last series of black-and-white architectural photographs, a continuation of his career-long investigation into buildings whose style reference the specific sociotemporal and ideological spirit in which they were conceived. These include modernist buildings in Moscow from the 1920s and 1930s, fascist Italian structures, and Bauhaus-style buildings in Tel Aviv and Jerusalem. For this series Förg photographed a suite of three buildings in Eastern France whose designs were based on sketches by Claude Nicolas Ledoux, an 18th century French architect closely affiliated with proto modernism and utopian ideals. Approaching these buildings from alternately distant and close up angles, Förg documented the buildings and their eccentric geometries, offering partial perspectives in grainy focus. Framed behind window glass and printed in characteristic large-scale, these photographs once again implicate the viewer into the work, effectively situating them within the utopian aims of prior centuries and their eventual collapses.