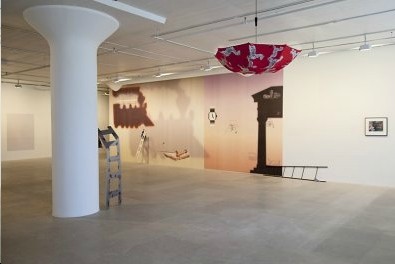 Greene Naftali is pleased to announce Hasta Manana, a group exhibition featuring works by Trisha Baga, Helen Marten, Ei Arakawa (with Das Institut, and with Silke Otto-Knapp respectively), Scott Lyall, and Ken Okiishi, which examines a recent shift in contemporary art production. Even though the transition from the industrial age to the information age has been underway for some time now, changes are still palpable as things get increasingly processed and compressed. There is a continual dissolution of opposites afoot—private/public, interior/exterior, self/other, real/virtual, here/there—opening up into a kind of digital haze. Doubling as both performers and prop managers, these artists articulate and stage this new dislocated terrain, and they use a variety of materials, from computer files to tanning beds, to do so. As opposed to modernist and even postmodernist paradigms, the artists in this show do not adhere to medium-specific conventions or ideas of site-specificity. Their practices are rather site-generic, digitally mashing up spaces, places, and things into a visionary—almost psychedelic—breakdown of figure and ground. It’s a kind of pattern and decoration composed of pixels, digits, and technological hiccups. The idea of the performative is central to all this work for, like a web browser, it can be constantly modified, remade, and “refreshed.”

In his BLACKY Blocked Radiants Sunbathed, Ei Arakawa, moonlighting as United Brothers (also the legal name of his brother’s corporation) in collaboration with Das Institut, has returned to his hometown of Iwaki City, Fukushima, Japan, some 50 km from where the power plants melted down, to put on a campy performance at his brother’s tanning salon with some of its regular customers and a host of his high school paintings. As the regulars vamp around these hot rod tanning beds, Das Institut paintings are projected onto them. Light rays and aesthetic rays alike hit the body, altering it, blending it into the environment
www.greenenaftaligallery.com