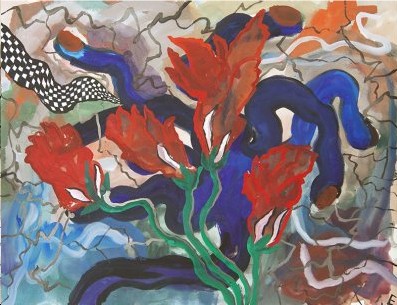 Greene Naftali is pleased to announce an exhibition of new work by Ida Ekblad, which marks the artist’s first solo show at the gallery. Comprised of paintings and sculptures, a common energy courses throughout the work which is characterized by a deep interest in color, shape, and line as well as history, refuse, and time. In both media, one sees twisted, interlocked forms that function on both aesthetic and metaphorical levels. While they may occasionally bring to mind the work of Kandinsky or even Dubuffet, the paintings turn primarily on the legacies of postwar abstraction and especially its Scandinavian incarnations, such as the proto-Situationist CoBrA group. The raw brute, almost anti-cultural quality of Karel Appel and Asger Jorn’s work forms a clear precedent for Ekblad’s yet the younger artist gives it a distinctive twist by imagining a painterly idiom infused with bold lyricism, occasionally washed out colors, and the vibrancy of the city street.

The urbanity of Ekblad’s work comes increasingly into focus in her sculptural work, the parts of which are often picked up from the curb or grabbed from the scrapyard and then combined in the artist’s studio. These works made of societal refuse have a sharp, jagged quality about them, an almost violent exuberance. The parts that comprise them are often left close to their found form; they undergo none of the macho crunches characteristic of someone like Chamberlain. By contrast, three additional sculptures in the show take on a more utilitarian function, appearing in the form of gates. Striking and lyrical and placed in the center of the room, these portals neither facilitate nor constrict passing from one space to another like such things normally do. Rather, the invocation of openings and gateways that they make is more metaphorical, the viewer being invited to pass from one state to another. Fittingly, Ekblad has often described her production in poetic terms; everything from word to paint stroke to metal scrap joins together to create grammar, line, rhythm, and meter. There is a certain pride and pleasure (without prejudice) that Ekblad takes in putting these parts together, which comes across in the crude and forceful I.E. with which she signs her paintings and reliefs. Her signature does not so much denote authorship, however, as much as it signals a spirit of evocative invocation. Hungry and curious if not voracious, Ekblad’s work invites the viewer to view contemporary life not in its traditional pop language, but rather through the very energies and refuse that bring it into being.

Ida Ekblad was born in Oslo, Norway in 1980. Her work was recently featured in ILLUMInations at the 54th Biennale di Venezia as well as the 5th Prague Biennale. She has had solo exhibitions at Bergen Kunsthall and Bonnier Konsthall, Stockholm, and has been featured in group exhibitions at the Migros Museum in Zurich and the New Museum in New York.

A piece preserved, it became cause to be less, Stubborn Yes but

Imagine the rest of the face

A gate opens unto a strengthened defense

but not given access, only led through a narrow passage, sedate.


You are represented kneeling, your hands flat on my thighs, in an attitude of reverence

Muted silver, spoon and stick in molds of muck

One must stand one's dusty ground, not stringent but strung out, uncompromising like but still willing


Depress that old smooth rod, let it weigh, do blend do bronze its way, through my gate

I push with force, submissive as bequeathed by a visceral change of course

You, miraculous bait, with a flower in your hand, bearing your palette

palming my tomb in duet, your runes my alphabet
www.greenenaftaligallery.com