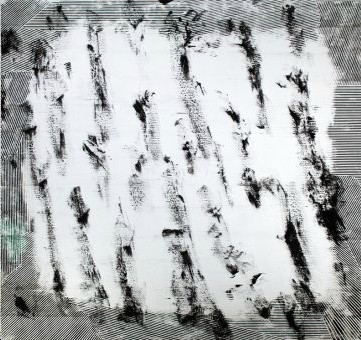 Greene Naftali is pleased to present a solo exhibition of new paintings by Jacqueline Humphries, the New York artist’s seventh show at the gallery. In the eleven large-scale paintings on view, Humphries addresses the frame as her initial point of departure in a fait accompli gesture that opens up the pictorial space as an active site. Painterly abstraction and conceptual engagement are enacted with a sense of boundlessness in direct reckoning with the physical surface.

Utilizing the transformative properties of her signature metallic silver paint, Humphries’ reflective canvases suggest a cinematic space that engages with light and movement in real-time. The metered process through which the paintings reveal themselves, unfixed in a constant shift of light and shadow, creates a distanced tension recalling iconic tropes of Film Noir. Humphries’ “silver screens” spotlight the viewer within a theatrical field that rewards physical movement, a foil to our culture of increasingly passive visual reception of images as they rapidly flash by on glowing monitors.

Vibrant graphic and gestural marks, at times manifest in the act of erasure, coalesce within Humphries’ metallic planes alongside fugitive drips and decisive dashes. An anti-formalist undoing of the painterly process through aggressive acts of scraping and stripping away from the painted surface is complicated further by the tension between construction and excavation, index and incident. A convergence of pictorial and real world space becomes the subject of these works as the viewer navigates the interstice, operating within a subjective, labyrinthine realm.