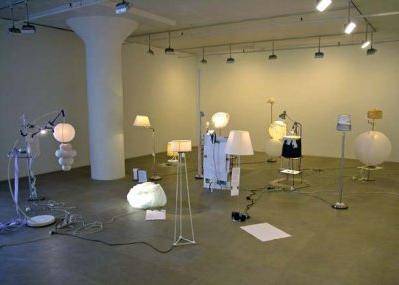 Greene Naftali is pleased to announce an exhibition of new works by German artist Josef Strau. Over the past two decades, Strau has worked in almost every capacity, as an artist, curator, gallerist, and writer. His writing, which often takes the form of catalogue essays, has gradually moved from more conventional analytic prose to a very personal and freewheeling form. In 2003, he published his first stand-alone text White Nights. This small booklet has become the first in a series of short stories comprising an ongoing novel.

For his current show, Strau presents several new and revisited text works, which are then illuminated as he connects them to a series of found lamps. Each lamp is subtly modified shades are added, surfaces are painted in white-out just enough to give them each a slight personality. The texts are then attached with ribbons, clipped to the lamps, or some lamps even speak them. While primarily a literary effort, reading is here relocated within a sculptural installation.

Strau currently directs the Galerie Meerrettich in Berlin, and he previously co-directed the seminal Friesenwall gallery in Cologne. He has been an important figure in the Cologne art scene and his work is included in the current exhibition MAKE YOUR OWN LIFE: Artists In & Out of Cologne at the ICA Philadelphia. In a catalogue essay for that exhibition, he speaks of the unproductive nature of Cologne artists of his generation, making oneself invisible as an aesthetic strategy a characterization which informs his methods as well. Strau has been in several group shows in New York, at Pat Hearn Gallery, American Fine Arts, and Greene Naftali. An earlier body of work, Nazis of Suburbia considered fascist architecture in Germany through a series of photographs.