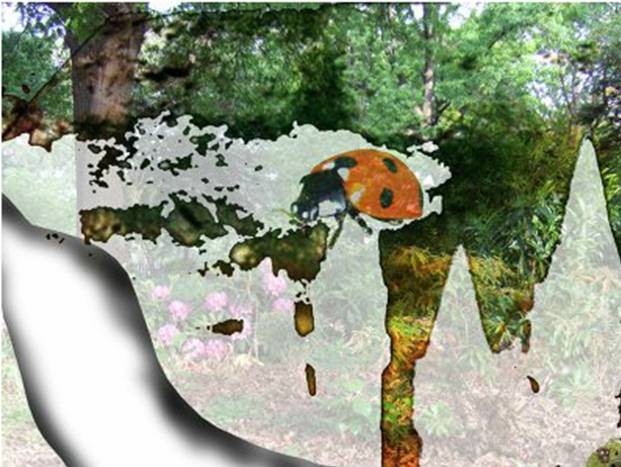 In the period before the exhibition the artist withdrew from human or social conditions and situations. As if thrown from an airplane over the desert and experiencing a surprisingly soft landing, the artist felt a short moment of extreme worry and fear then suddenly found himself in the middle of paradise: the neighborhood park close to his house where he found small things on the ground or in the bushes. Following this experience, which he could only call paradise as he never developed a language for these small worlds, his life in the big world could accordingly only be called hell.

Although he was not becoming a real participant, he felt that he had been chosen to be a passenger who would walk, ramble, and promenade through the different spheres inside and outside the great park. He had started believing that the ignored beauty of the neighborhood would in fact be the perfect earthly place for him. At this point the artist’s work suddenly fell under the influence of the garden and the flowers as the walks turned into exercises, often done in the hours of dawn. He began to use his camera and audio recorder as receiving instruments to collect images and sounds from the park—measuring the new paradise itself—similar to the way children make noises with a found rod, hitting the bars as they walk along fences.

As much as the place of the drama is mostly the park and the surrounding neighborhood, the whole period was a time of becoming attentive and receiving all kinds of information. Later, the question of translation was worked on specifically with the help of Stefan Tcherepnin who developed the practical machinery for the transmission of sounds in a dedicated collaboration with the artist. Deconstructed lamps became transmitters for the sound of the garden following a very old singing method of duality in incantation, in which the main text is followed or interrupted by the “responding speaker” or chorus.

All of the material in the show is a result of coincidence; rising from non-productive attitudes, leading to a devotion to randomness and so-called “inner voices.” Recurring motifs are often guided by the artist’s impulsive feelings of epiphany; for instance, the belief that he should always carry a window screen to hold in front of the camera lens or his immediate identification with the bugs in the park as corresponding passersby through different worlds. The artist began to praise the day, the early sun, and the influx of the voices in the neighborhood after so many years of celebrating and praising the dusk and the nights.

Several of the texts for this project, including King David Invoking and Montezuma Appearing, describe experiences with both inner and exterior spirits and have been used in similar forms for earlier works. The artist believes that there are very obvious, strong similarities between David and Montezuma; not only are they both kings of great lands, but they also share a legendary and mysterious influence in the kingdom of poetry as well as an intense ability to revolutionize and reform their nations. Another older text also used in this project, And Then I Fell From Hell, stands for the very beginning of both the neighborhood and the American experience, extending the praises of the day and of the neighborhood to the entire country in general and trying in so many ways to express the gratitude of having taken part in it.

Josef Strau lives and works between New York and Berlin. This is his fourth solo exhibition at Greene Naftali.
www.greenenaftaligallery.com