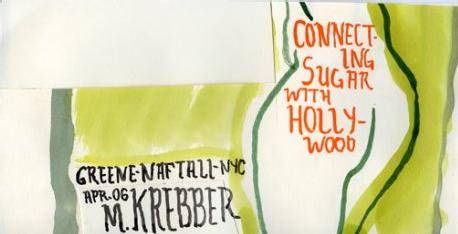 This exhibition draws a bow between Gerhard Richter and Jack Smith. With a bow I mean to connect a difference, between the production of pictures out of a clarified attitude, from a distance of not being involved (and at worst, from a safe distance). While my picture of how Jack Smith is doing art is an art done without a distance. It is unsafe. An unsafe theatre group with the possibility for something unexpected, here touching a different kind of something unexpected in the work of Gerhard Richter as in the work of Andy Warhol and also in the work of Odilon Redon, for example.

The title of the exhibition is borrowed. Jack Smith, being asked by Sylv Lotringer what he would name Flaming Creatures today answers Connecting Sugar with Hollywood.

When an advertisement had to be done in time, Richard Hawkins helped and made a beautiful drawing with the title and gallery information drawn on it too, which I couldn't resist also using for the invite and so it became part of the exhibition.
----------------------Michael Krebber

Greene Naftali is very pleased to announce Michael Krebbers third exhibition at the gallery. A legendary figure in the Cologne art-scene, a colleague of Martin Kippenberger, he has influenced a generation of young artists. Krebber is a professor at the Stlschule in Frankfurt. He will be included in the upcoming exhibition Make Your Own Life: Artists In & Out of Cologne at the Institute of Contemporary Art, Philadelphia.

Krebbers work was featured in last Octobers Artforum, the cryptic image adorning the magazines cover hinting at the eccentric nature of his practice. For an exhibition in 2000, he borrowed his paintings back from collectors, then instead of exhibiting them in a normal manner, laid them out patchwork-style on sawhorses in the middle of the room. Where the paintings should have been hung, the artist instead installed sections of paint-splattered masonite, which turned out to be his actual studio floor, cut up and placed directly on the wall as if paintings.

In another instance, Krebber conceived an exhibition presenting the history of painting from Kandinsky through Warhol, Polke and Trockel without using a drop of paint. The exhibition was made of simple fabrics stretched over 16 panels. The three fabrics were a cheap nappy blanket, polka dots, and various Bavarian check ginghams. Titled Flaggs (Against Nature) (2004) the series is now currently on view in the exhibition Travelin light at the Bonnefantenmuseum in the Netherlands along with works by Marcel Broodthaers, Eadweard Muybridge, and Franz West.

These isolated examples only hint at the subtlety, beauty, and complexity of Krebbers work and his uneasy questioning of the fundamental realities of art and its modes of presentation.