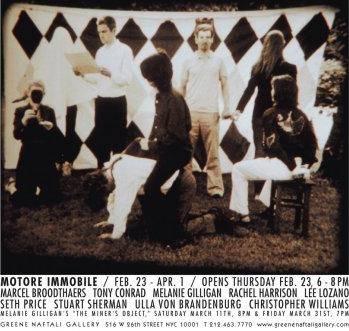 Greene Naftali Gallery is pleased to present Motore Immobile. This group exhibition takes as its starting point a never-before shown video of artist Stuart Sherman performing his seminal Spectacle object-manipulations. Sherman (1945 - 2001) created a series of solo performances, which, like magic shows, radically transform the everyday objects he employs as his props to tell a poetic nonverbal story through a language of movements and juxtapositions. Like a motor powering a machine, Shermans video is meant to activate the entire exhibition, which explores the artistic possibilities for transformation and narrative.

Like Shermans object performances, Rachel Harrisons sculptures are dynamic settings where handmade sculptural elements, bases, and household items are in a constant state of redefining each other to create a visually complex circular dialogue around the possibilities for support and display. The engagement between support structures and the things they present is found too in Christopher Williams Bouquet, for Bas Jan Ader and Christopher DArcangelo. The work, an homage to two conceptual artists who ended their own lives, requires the construction of a free-standing wall on-which a framed photograph is hung, and references DArcangelo, whose often-nihilistic art practice involved him doing paid construction work as his art.

Tony Conrads Yellow Movies from 1972-73 are exemplary of the exhibitions title, moving and unmoving at the same time. Taking structural cinema to its ultimate end, Conrads movies are screens made of white house paint, which slowly turn yellow movies that go on forever, telling a story of pure time without projectors or film. Ulla von Brandenburgs films create stillness in a different way as she sets up actors in tableaus, then films their attempts not to move. The actors become props and the action is the weather and the incidental activity across the films surface.

Both a film and a book, Marcel Broodthaers A Voyage on the North Sea illustrates an unseen third entity, a painting of a boat at sea. The scenes are close-up shots of parts of the painting, each separated by titles announcing page numbers. The story unfolds differently in the film and the book. Another circular dialogue emerges, here a meditation on the nature of each medium, including its limitations. Narrative is further explored in Melanie Gilligan's performance "The Miner's Object." She too deals with discrepancies and dualities and uses an actress reading from a teleprompter to investigate the relationship between storytelling and report.

Seth Prices installation features a printed image of a horse which jumps between works, while in suspended relief, impressions of ropes push through white plastic sheets, creating a series of immobile animations. As if stepping out from backstage, real ropes dangle from behind. Finally, Lee Lozano's painting of a triple-headed hammer imbues the object with an incredible potential energy. The work is part of a mid-sixties series of violently pornographic sketches and paintings of tools such as hammers, drills, clamps, screwdrivers, vice grips among other erotically charged objects.

For further information please visit our website at www.greenenaftaligallery.com