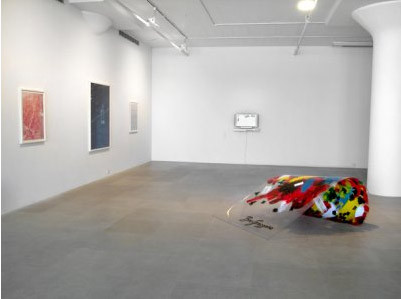 Greene Naftali Gallery is pleased to present the group exhibition, Payday. Titled after the 1972 film starring Rip Torn as a morally bankrupt country musician, this exhibition brings together artists who share an irreverent attitude toward the boundaries of the mediums and genres in which they work. The artworks exhibited collapse categories within mediums--like the genres in photography (still life, landscape, portraiture) in Roe Ethridge's work—and across mediums such as Allen Ruppersberg's intersection of literature and conceptual art, blending within single works a range of cultural interpretations.
Ethridge will present a new suite of photographs, recombining new and old images—either reproduced in print or exhibited in different contexts, challenging the photo essay format as it moves between different forms of display. Allen Ruppersberg’s image/text work in six parts, As the Crow Flies; or How I Miss the Avant-garde, reformats a rejected written proposal he had made for an outdoor sculpture dedicated to the avant-garde practices of Allan Kaprow and Ian Hamilton Finlay. In these prints, recurring visual elements from other projects of Ruppersberg's provide a colorful visual ground on which the rejected text is printed.
The artist collaborative Bernadette Corporation will exhibit three works that utilize salvaged televisions. In one, their own video Hell Frozen Over is presented on a cracked plasma monitor’s abstract image, leaving only the sound to be discernable. A second sculptural work leans a pile of large monitors against each other, the top one displaying a still jpeg image of Judy Garland's Hollywood star after a nearby neighborhood fire. The third displays a scratched dvd’s attempt to play. This misuse of the monitors and different techniques of generated on-screen stillness underscores Bernadette Corporation’s history in making video and their interest in the politics of detournment. As with many of the artists in the exhibition, medium takes on an expanded role, even extending to occupy the role of artist/producer. This is noticed in Bernadette Corporation’s move from fashion brand to publisher, to artist, and J. St. Bernard, an earlier precedent. Dating back to the late '80s, this artist’s identity has remained elusive, producing painting/sculpture hybrids that mixes abstract brushwork with pop culture references and readymade materials, playfully mimicking sculptural trends and artistic ambition.
The intersection of physical mediums (and its ability to satirize) is also apparent in the work of Rachel Harrison, whose 2006-2008 work, Double Vision, incorporates video projection, assemblage, sound and museological-cum-retail display into a single work. Alex Hubbard's hybrid form of painting, performance, and video coalesce into spatially confounding tabletop videos whose extensive editing and overdubbed sound further blur one’s ability engage the work as medium-defined endeavor.
Concurrent with "Payday," the gallery will present an installation by Jim Drain to coincide with the release of a new book of his collages, "Kauzchensteig 10," published by No. 6 Books. Additionally, for the week of June 24-28, the gallery will host a special shop event with the Berlin-based design group Bless.
www.greenenaftaligallery.com