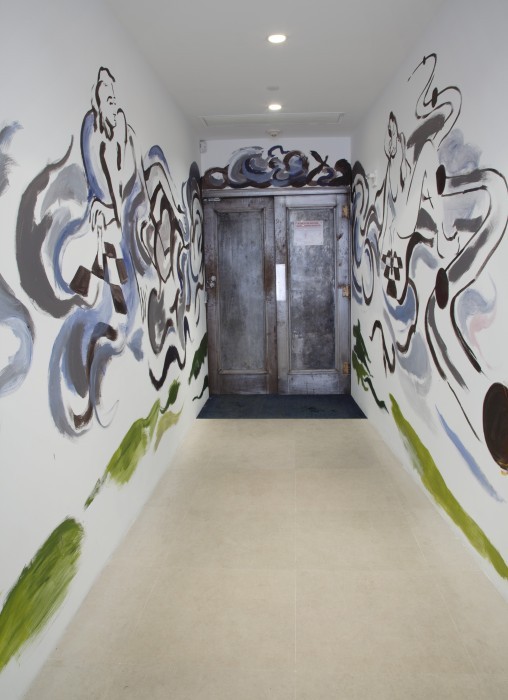 Greene Naftali is pleased to announce the third solo exhibition of new work by Sophie von Hellermann. Known for her whimsical paintings on unprimed canvas, their lithe quality seemingly indebted to the thinness of the paint she uses, von Hellermann’s work makes allusions to a wide variety of classical precedents; Color Field painting, Munch, and the Symbolists all come to mind. Summoning this diverse set of spirits, von Hellermann’s paintings shift in tenor from wintry mother-and-child scenes to apocalyptic hallucinations of contemporary America, all rendered in a style that might best be described as stream-of-consciousness. Just as daydreams give way to darker thoughts in these paintings, so does figuration give way to abstraction (and vice versa) with wisps of pigment moving across canvases in order to suggest a variety of forms. At the same time as she concocts this unconscious realm, von Hellermann works on a scale not dissimilar to that of history painting, allowing her to collapse and conflate the personal and the historical into an uncanny mix. Fittingly, The Lucky Hand borrows its title from a musical drama by Schoenberg in which love, betrayal, and forgiveness are in constant push and pull, and in von Hellermann’s paintings a certain feeling of desire and the difficulty of its realization appears as well.
In addition to canvases featuring devils and wicked witches, von Hellermann has transformed the gallery’s entranceway into a stormy scene that offers a fantastic mirror of the New York winterscape. Part theme park ride, part decorative mural, and part children’s room, one has to walk through this passage to enter the exhibition inside. Moving past massive reclining chess players, one finds oneself in an exhibition that is both a form of play and a thoughtful meditation on the interstices between present-day reality and far-off dreams.
Sophie von Hellermann has had one-person exhibitions at the Chisenhale Gallery, London, and the Neuer Aachener Kunstverein, and in 2009, she had a two-person show with Josh Smith at Le Consortium, Dijon, and Museum Dhonts-Dhaenens, Deurle, Belgium. Her work has been included in numerous important group exhibitions such as Cher Peintre, Lieber Maler, Dear Painter at the Centre Pompidou, Paris, and will be featured in the upcoming exhibition Watercolour at Tate Britain. Her work is included in the collection of the Los Angeles County Museum of Art. She is a founding member of hobbypopMUSEUM. von Hellermann lives and works in London.
www.greenenaftaligallery.com