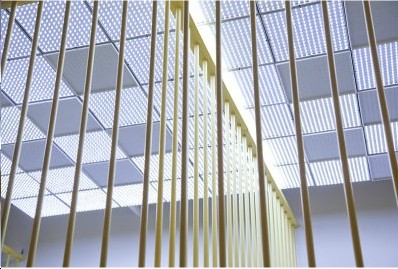 Greene Naftali is pleased to announce WiP, an exhibition of work by New York-based artist Tony Conrad. This will be the artist’s second solo show at the gallery.

Tony Conrad is a pioneering avant-garde artist, filmmaker, musician and composer. Conrad has long been employing a range of methods to investigate authoritarian boundaries in art – from his early 60’s anti-art demonstrations with Henry Flynt and Jack Smith, to his Yellow Movies series of paintings and works on paper with central screens of white paint yellowing over decades, thus creating a film whose plot outlasts a lifetime.

In this exhibition, Conrad calls attention to power structures embedded in film by foregrounding an underground genre – Women in Prison, or WiP. “WiP,” starring artists such as Tony Oursler and the late Mike Kelley, explores the peripheral possibilities of film not just as a medium but also as an industry, highlighting a second tier of actors, a low budget aspect, and subversive subject matter. Moreover, the relationship of jailor to prisoner takes a central role, extending Conrad’s examination of authority into a social realm. Shot in 1982 and 1983, the video work on view is converted from black and white 16mm film. Selections from six hours of footage, separated by blips and shot changes, depict the antics of oddly indifferent inmates, from nonsensical singing to taunting banter.

The first ever screening of these excerpts is accompanied by Conrad’s installation of jail cells, a recreation of the original set within the gallery, creating an immersive experience of a dystopic genre, and further upending traditions of film through a transparency of process. Tucked away from natural light, the set that Conrad has created for the gallery is destabilizing and unsettling. The pastel shades of pink and yellow painted on the jail’s walls and bars provide a critical nod to the gender of the prisoners, while the trappings of the cells are otherwise scant and dismal – narrow bunk beds, bedpans and sinks. Overhead are relentlessly blinking LED lights, further adding to the disturbing component of the installation. As the lights flicker in the jail cell, the projected video is steadily eclipsed by the light and revealed by the dark, creating a disorienting experience as the viewer’s focus rapidly shifts between film and set, past and present.

Tony Conrad’s recent solo exhibition at 80WSE, his first institutional survey in over twenty years, featured his media-based social critiques. Holland Cotter, in a New York Times review of the show, noted that the multi-faceted practice of Conrad “still looks radical and prescient a half-century after it began.” His work has also been shown at the Museum of Modern Art, Documenta, Venice Biennale, Tate Modern, LA Museum of Contemporary Art, and The Whitney Museum of American Art.