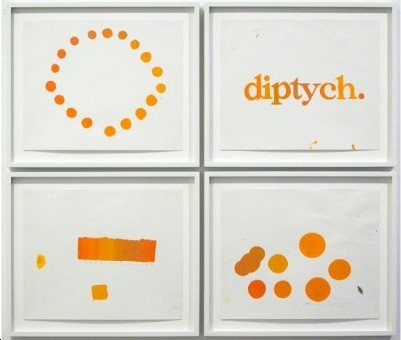 Greene Naftali is pleased to present a group exhibition of works on paper by a selection of the gallery’s artists and a special presentation by the artist Ricci Albenda. The artists in the show each have a direct engagement with drawing and working on paper, extending the durational, chromatic, and textural limits of the medium. From the conceptual “film” of Tony Conrad and Josef Strau”s lamp constructions to the more exquisitely mannered painted paper collages of Amelie von Wulffen and Richard Hawkins, the show underscores the conceptual and formal diversity of the gallery’s program.
Using collage and appropriated imagery, a number of these works invest the flat surface with a web of information, often betraying sculptural, filmic, and painterly interests. In such cases as Rachel Harrison”s alterations of credit card advertisements and Michael Fullerton’s re-printing of a Gainsborough painting, the artists manipulate the communicative medium of the newspaper. Bjarne Melgaard makes use of the printed image by rephotographing evocative images of young men from the 90’s publication Made in the USA and jabbing these into the wall with surgical scalpels around the perimeter of his own suite of “pony jesus” drawings. Gedi Sibony utilizes the simple gesture of reversing the matted image of found framed pictures, creating eccentrically revealed readymades. And a new series of paired paintings on paper by Richard Hawkins features striking palettes of color punctuated by paper moons, relating to his recent celestial telegraph paintings which incorporate ideas of theosophy and Indian spiritualism.
Paul Chan will present a major new drawing series, entitled My laws are my whores. These imposingly large charcoal portraits of the current U.S. Supreme Court Justices are hung in a formal assembly and executed in stark black and white, the weight of these characters’ prestige is paired with the uncanny smirks they all share. The images are taken from an official website and drawn in reverse, so acting as mirror images.
Ricci Albenda, who is well known for his architectural interventions and paintings, will present a suite of conceptual drawings which outline his complex color systems. These paintings operate synthetically, mapping an alphabetical and chromatic system conceived by the artist. Grouped chromatically, these seemingly reserved compositions take on a more panoramic effect, betraying the more visceral installations for which the artist is known. This installation is made up of excerpts from the “Cyclidrome” series that the artist exhibited at Andrew Kreps Gallery in the winter of 2004.
www.greenenaftaligallery.com