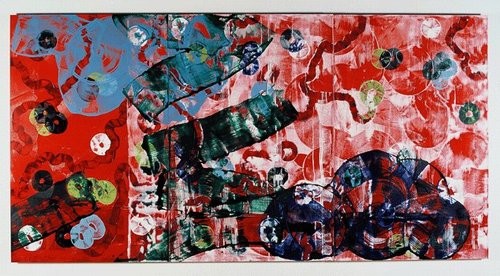 Green On Red Gallery is pleased to present a solo exhibition of new paintings by John Cronin. In his essay Modernist Painting Redivinus, Donald Kuspit refers to John Cronin as a process painter, or if one prefers, an abstract painter. He viewed the great expressionist achievement as the means to make paint seem like a freshly discovered, magically mercurial material. His new paintings continue to explore the nature of painterly abstraction.

Each work in the exhibition remains untitled, allowing the paintings to be read without the burden of a linguistic conceptual framework. The visual language employed in the works engage with the materiality of painting. The layers of paint and coloured surfaces overlap to create a seductive visual experience. There are particular motifs that recur within the paintings that have a particular resonance to the poetic and metaphysical. These repetitive gestures create a certain logic to the works .

The scale of the works is also an important aspect to the exhibition. The interspersion of small scale works juxtaposed with large triptychs create a dialogue between the pieces. Jane Humphries in her text Entering A New Visual Zone refers to Cronin’s new works: "as though they are aware of the past, (the works) are gloriously defiant, as his exuberant kaleidoscopes of retinal assaulting colour push the parameters to the edge, creating on one level pure sensory pleasure and on another an intelligent reinterpretation of abstraction, providing a sufficient case, that despite our media saturated age, the medium of paint has a lot to say."

Born in Dublin in 1966, and graduating from the National College of Art and Design in 1988, John Cronin has been exhibiting since the late 1980s. In the intervening years his work has been seen in Europe, U.S. and Asia. Most recently it has been exhibited alongside that of Cecily Browne, Ian Davenport, Mark Francis, Howard Hodgkin, Callum Inness, Jason Martin and Seán Scully in the major review of Abstract painting in Britain and Ireland, Painting in the Noughties. While his work's primary concern is abstract painting in the age of artificial intelligence, the titles of his exhibitions often reflect a desire to add a thematic twist to each new body of work. Through a diverse range of exhibitions, including MANUMIT, SURD, SEREIN, MHz, TAINT and PALINODE, we have seen him continually extended the language of his practice.

Cronin has gleaned praise from many quarters most notably from the eminent New York Critic Donald Kuspit, who says - "he puts the 'juice' back into modernist painting, after Greenberg's post-painterly theory squeezed it out." John Cronin is one of the leading abstract painters working in Ireland today and his work is included in a very extensive range of collections both in Ireland and abroad. He has also been commissioned to produced many very large scale pieces for clients. He is currently working on a new body of work.
www.greenonredgallery.com