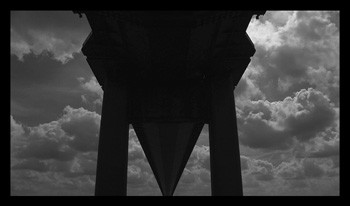 'Frame, Glass. Black', Niamh O'Malley's third exhibition at Green On Red Gallery, consists of a major new video work filmed at the Humber Bridge in Northeast England, a series of sculptural works using two-way glass, mirror and oil paint and a new suite of drawings. O'Malley's work often uses complex framing devices as strategies for emphasising the distance from source to spectacle. The primacy of the apparatus of production is made evident.

In 'Bridge' a frame of black contains the projection. The darkness of the bridge becomes a negative, invisible against the blackness of the cloth screen so that the visible projected areas lie within the gaps formed and framed by the structure. 'Bridge' presents a weighty and steady structure of steel and concrete which spans and frames both air and water. Each stationary shot is opened, closed and animated through an external structure/filter. Within the scrolling visual narrative, the pictorial gaps and absences kindle a presence; from concrete to water.

A series of new sculptural works relate both formally and conceptually by continuing this play with barrier and gap. Part mirror, part glass, large panes are held at angles in the space. They form viewing thresholds; double-sided spaces whose shifting reflective surfaces deny and periodically reveal their imagery.

Niamh O'Malley will be in conversation with Caroline Hancock (IMMA Projects Curator) in Green On Red Gallery on Thursday 22 October at 7pm.

This exhibition was made possible by the support of an Arts Council Project Award & Green On Red Gallery.