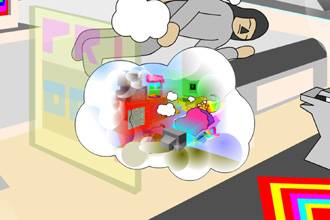 Paper Rad consists of three American artists, Jessica Ciocci, her brother, Jacob Ciocci, and Benjamin Jones. Widely acclaimed in the States (where they are viewed as something of an artworld cult wonder) Paper Rad originated when the three met in Boston in 2000 at a screening of Jones’s films. Since then, their practice has evolved to include installations, videos, performances, comics, website art, happenings, and, whatever strikes their collective fancy.
Critically, Paper Rad is often described as an art collective (which they dispute) that produces mixed media art and which draws upon and re-articulates their vision of popular culture. Paper Rad have referred to science fiction fantasy, capitalist consumer culture, Eastern religions and New Age spiritualism, 70’s and 80’s cartoons such as Garfield and The Simpsons, and children’s toys and television programming such as My Little Pony and The Muppets, as being influences to their practice. As a result, Paper Rad often produces an hallucinatory, colour-and-sound drenched technical free-fall of an experience for the unsuspecting. Their work is intelligent, exhuberant, disturbing, kitsch, confusing, humorous, knowing and, utterly, utterly of the moment.

Mick Wilson, has written of Paper Rad,
Their skippedy-hop play is much more reasonable than you or I might have imagined. Ignore this work at your peril; it’s a last exiting chance to access the important niggling noises between your ears. Forget endgame; forget your footnotes; forget your old grey cardigan: get over the programme; get with paper rad.
In an interview with Ben Tarnoff of the Harvard Advocate, Ben Jones and Jessica Ciocci described the group thus,
What we’re doing is just common sense. I think it’s an extension of our everyday philosophy: how we wake up, what we eat, what we do each day. There isn’t a separate manifesto of what we are trying to do in terms of art.
They have exhibited, to name but a few spaces, at Deitch Projects, NY; Foxy Production, NY; Compact/Space, Los Angeles; The American Museum of the Moving Image, NY; The Liverpool Biennale; the Whitney Biennial 2004, Space Gallery, Pittsburgh; and the New Museum of Contemporary Art, NY. This will be their first solo exhibition with Green On Red Gallery. Paper Rad will perform live in the Gallery on Thursday, 19th October. A publication with essays by Mick Wilson and Thurston Moore of Sonic Youth will be publishd during the course of the exhibition.