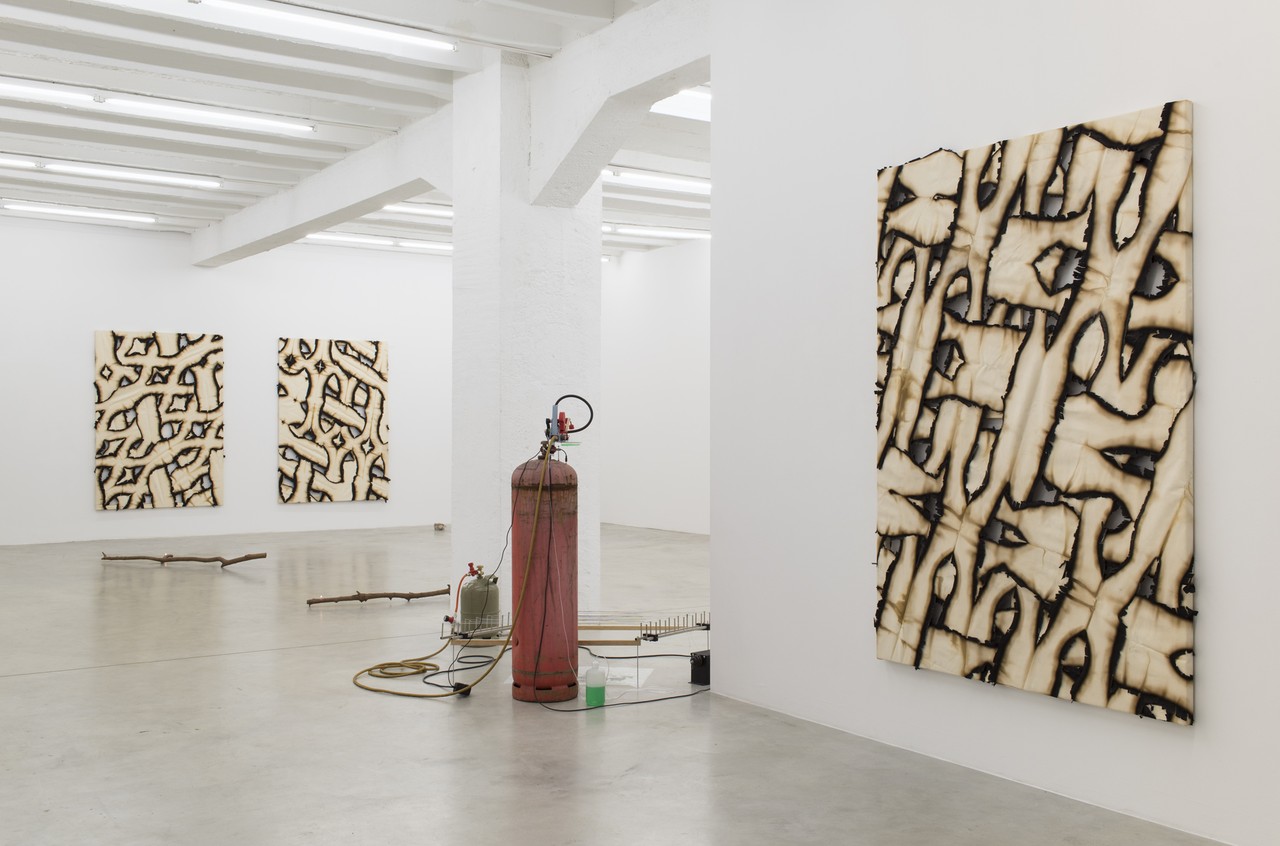 Before going to art school, Israeli artist Ariel Schlesinger was taught carpentry, in California, by a Japanese master carpenter, with whom he would, years later, work on the reconstruction of a partly destroyed temple, eventually installed at Schloss Solitude. Even though not directly related to the works now on show at Galerija Gregor Podnar, the story of the temple can help understand the poetics that rule Schlesinger’s oeuvre: its philosophy, so to say. Destruction, often symbolized by fire, plays a preeminent role in his practice, but it doesn’t annihilate, instead it points to the possibility of renewal, to a blossoming of new forces and, maybe, a new balance.

In Untitled (Bubble machine) (all works 2017), for example, we witness the endless, mechanical cycle of a simple machine producing a soap bubble, which then drops and burst into a ball of fire when touching an electrified wire. The visible simplicity of the mechanism introduces other significant aspects of Schlesinger’s practice, i.e. the importance of craftsmanship and the artist predilection for visible, straightforward mechanical solutions. There often is something magical to his sculptures and large-scale installations, but the public is also allowed to metaphorically pierce into the mechanisms and understand, or at least imagine, how they function.

Other works in the exhibition, such as At arm’s length, a series of bronze sculptures molded on fallen branches, from which gentle flames emerge, poetically suggest the need to endure and resist. In fact if there is, beyond its visual and physical impact, a message to be found in the works that make up this exhibition, it is probably that there is an undeniable beauty that is left on things that pass through fire (the beauty that shines, so to say, in Animals push and pull along).

This text began by suggesting that Schlesinger’s philosophy explores the fertility of destruction processes, and his latest works confirm that there is a grace that can only be attained through endurance. Daily, we witness the tragedy of thousands who are forced to flee their homes; we watch nature being systematically destroyed; we are shocked by the disclosure of yet another scheme of corruption and abuse of public money. Even though this exhibition was not conceived in direct response to the destruction of the world, as we know it, the idea of a stubborn beauty, born of destruction, is a much-needed message in the challenging times we live.