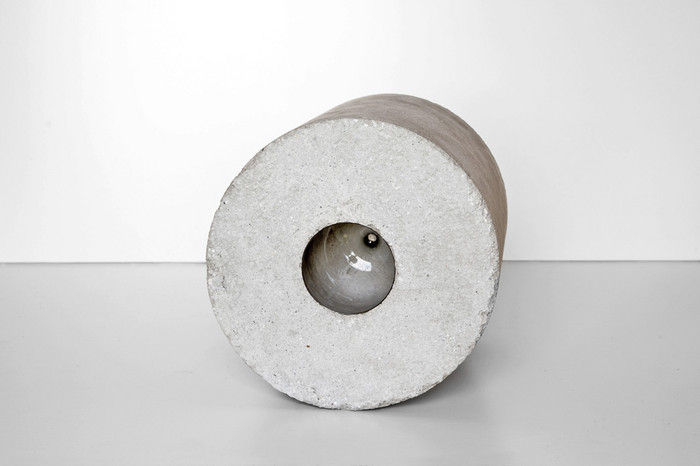 Goran Petercol, Glass, 2009
“It is the interstitial space of objects that enable their use. For example, for a glass to be used there has to be a void in order for the liquid to be poured into it, as well as free space around it for it to be capable of being grasped. I work with these interstitial spaces.” – Goran Petercol 2009


Galerija Gregor Podnar is pleased to announce Goran Petercol’s first solo exhibition in Berlin, featuring two light installations, drawings from the Symmetries series, and the artist’s most recent series of works in concrete.

The light installations From Pula (2008) and Sjene (1990) deal with the way the purpose of a utilitarian object is changed by exhibiting it. In both works, the pedestal serves to physically enable the exhibit to be better displayed, implying the notion that an object becomes an exhibit by the act of selection, even before it is placed in the gallery.
Petercol’s small sculptures, such as the three Glass works, Beer Can, Symmetries and Pipe (all 2009) on display, are based on the idea that an object can become a measure in the enlargement or reduction of another object through the use of concrete to materialize the interstitial space.
The Symmetries drawings consist of copied forms in relation to a given axis, plane or centre of rotation. They relate to the concrete sculptures in the choice of objects and shapes, and to their clear decisions about the rules of execution; as Petercol says, “By making certain decisions, I established the border of execution in advance or did away with the interstitial space of the object.”
Since 1975 the art of Goran Petercol is based on the precise observation and positioning of the transcendental object within processes derived from the conceptual art practices and analytic painting of the 1970s, as well as on the recontextualization of the interaction between the viewer and the artwork. He made his first light installation in 1985, treating light as a material, and shadow as a smaller quantity of light. Petercol works with material and intangible forms, spaces and interim spaces; his spontaneous and controlled art treatment deals above all with the problem of creation itself.

For further information, please write to us at: berlin@gregorpodnar.com.