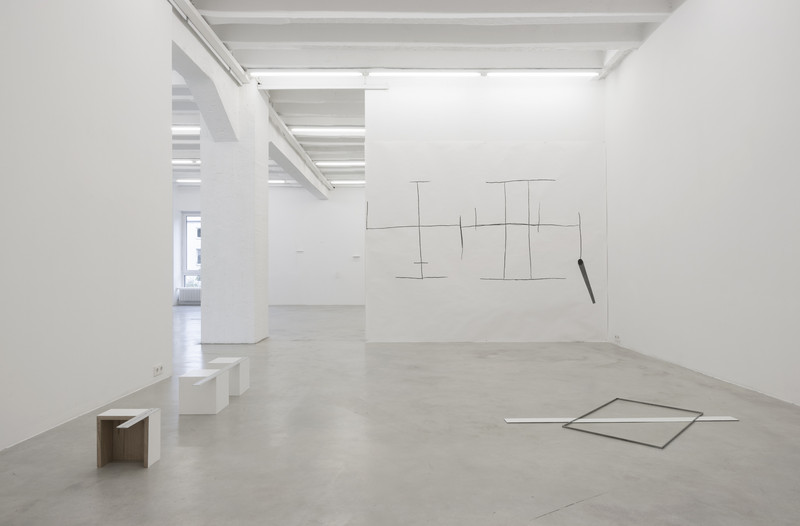 The exhibition Site, Specific, Objects brings together three artists, Marcius Galan (born 1972), Fernanda Gomes (born 1960) and Goran Petercol (born 1949), who each stand for their own distinct and extraordinary artistic practices, yet also share many similarities with one another. Each artist inherently possesses a strong focus on clear forms, which is rooted in the Brazilian and Croatian tradition of concrete and geometric art. This by no means stereotypical continuation of an artistic legacy is perhaps the subtle condition, which has brought these three artists together for the exhibition project. A significant amount of the initiative behind the exhibition in Galerija Gregor Podnar came from the artists themselves. Gomes and Petercol exhibited their work at the Bienal de São Paulo in 1994 (it was here that they met for the first time) and a year later at the İstanbul Bienali. Galan ‘discovered’ Petercol’s works some years ago at Art Basel.

Site, Specific, Objects is a common point of intersection for the three artists’ works and, following a dialogue, it serves as the working title of the exhibition project. Although the idea of light, line and measurement is a constitutive part of the exhibition, it is also necessary to consider further significant themes. One of these is the place in which the works of Galan and Gomes are presented. The works can – but need not be – viewed as site-specific. They appear and are perceived as objects, but they could also be placed in a different exhibition. Also Petercol’s works focus on a concrete space, they awaken an interest for a real place and emphasise a common reference. Viewed normatively, the known definition of ‘site-specific objects’ is broken down into three parts, which are equally weighted and placed next to each other. Divided by commas, the title enables a new variant reading: still consistent as a definition although it does not say anything precisely, but rather annotates and implicates.
Furthermore, the exhibition is also a certain reflection of the gallery’s main focus.

With thanks to the offices of the Croatian and Brazilian Embassies in Berlin.
www.gregorpodnar.com