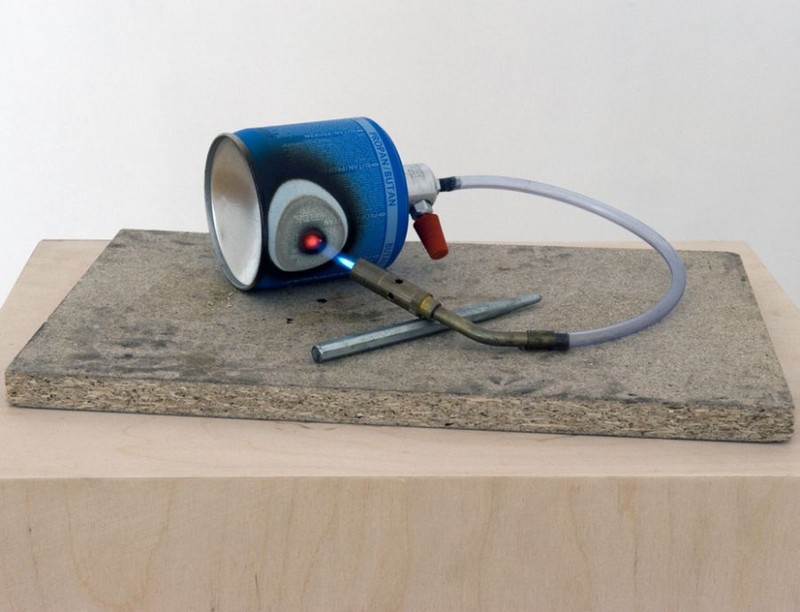 At its Project Space in Ljubljana, Galerija Gregor Podnar is pleased to announce Ariel Schlesinger’s first solo show in Slovenia. "Brake Shoe" presents the new work Incense Pencil, as well as a selection of recent sculptures, a video, and photographs.

Ariel Schlesinger has the rare ability to take the things that inhabit our world and endow them with an element of magic. His practice creates a tension between the material nature of mass-produced workaday objects, and the functions they were designed for. The artist introduces a subtle disruption into consumer goods, not by dramatically modifying their appearance, but rather by “enhancing hidden aspects of their existence”. By forcing us to reconsider how we look at such things, he turns an often-trivial reality into something sublime.

In the works on view, Schlesinger uses techniques inspired by the “reverse engineering” process: he investigates the hidden possibilities trapped in utilitarian objects. The title "Brake Shoe" – a familiar yet uncomfortable combination of two common words that refers to a part found in the brake systems of rail and motor vehicles – serves as a metaphor for this reverse engineering. Incense Pencil, Schlesinger’s newest piece, incorporates frankincense as a key element: various writing implements lie on a desk as if they have just tumbled out of a pencil case, but if you look more closely you will see that one of the pencils is actually a burning stick of incense.

Born in Jerusalem in 1980, Ariel Schlesinger lives and works in Berlin. His works are currently on view in the solo exhibition "Catastrophe Is Subjective" at the Kunstverein Braunschweig in Germany. He is also participating in the ongoing group exhibitions "Under Destruction" at the Swiss Institute in New York, "Based in Berlin" at the Atelierhaus Monbijoupark in Berlin, and "Experimental Station" at the Centro de Arte Dis de Mayo in Madrid.

The project is supported by the Ministry of Culture of the Republic of Slovenia.
www.gregorpodnar.com