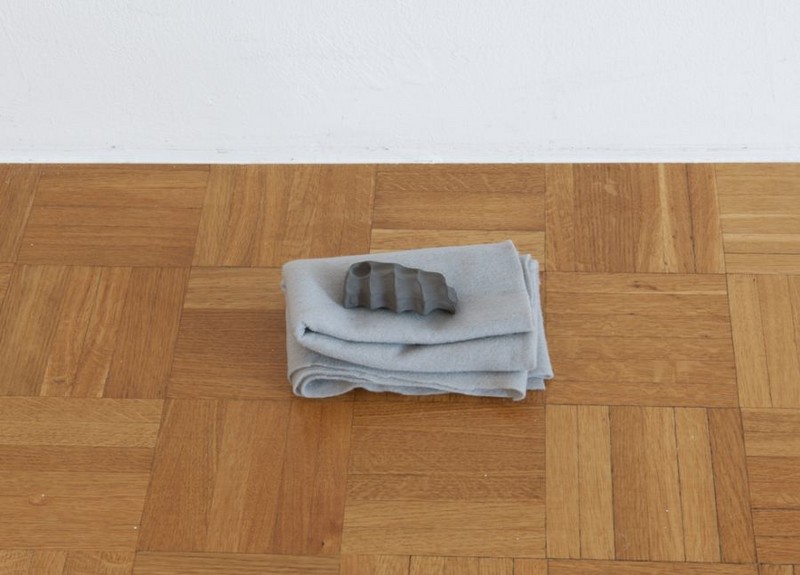 Galerija Gregor Podnar and its Project Space / the DUM Association in Ljubljana is pleased to announce Fraternal Sheep - the first solo exhibition of the work by young American sculptor, Cori Williams. Williams was born in Atlanta, Georgia and received her BFA from The School of the Art Institute of Chicago in 2011. She lives and works in Brooklyn, New York.

In her sculptures and drawings Williams, with preciseness and almost analytical clarity, explores some of the most basic issues concerning sculptural material and its relationship to creative process and human body. The rigor and minimalism of her practice is in most cases manifested as humble and fragile change, a barely recorded difference or an unstable form that suggests a potential event. A cornerstone of Williams‘ work is not its material presence - she uses a sculpture to illustrate constant process of transition. She primarily embraces value of gesture - rust, flip, burn, dig, move left or right, imprint. The sculptural form even if strongly present becomes secondary.

What makes her work so intriguing is the fact that despite its apparent simplicity it remains mysteriously charged and enigmatic - Williams’ creative process even if not explicitly revealed is in most cases based on a premise that artwork is direct abstraction of a real intimately experienced event. In this way, the sculptural material becomes a surrogate body. Body to be cared for. Body to be experimented with. In her work this body is subjected to deep analysis and abstraction but remains loved at the same time.

Williams will present four works at the show. On the very entrance door to the gallery space we encounter the work titled “1 of 2” - it’s a piece of wood in the middle of the entrance door that mimics the door frame. The visitor ultimately has to choose which side of this middle “support” frame to enter or exit - left or right. On the way out the wood is mirrored, reflecting just seen works inside the gallery.
Central work of the show - “Hollow Conveyances: iteration 1” consists of two 30cm wide and 190cm high steel pipes. The only difference is the amount of rust on their surface. Prior to their installation in the gallery, one of the pipes lived with Williams in her apartment, while the other lived among other sculpture materials at a workshop across the street. Following artist’s instructions one of the pipes when not exhibited is always stored in a protected, private space, the other is exposed, public object. The only time they meet and will hopefully also meet in the future is in an exhibition space - a space of singularity that exposes their identical origin and their “forced” difference.

In the second space there is a set of three drawings “A”, “B” and “A+B” that allude to the same idea of common origin - simple “v” symbols on one sheet of paper are juxtaposed with similar but mirrored symbols on the second drawing. The third drawing is the black graphite transfer paper revealing the process of the creation of both drawings with still barely visible imprints of the pen where the symbols are still joined in diamond shaped form when they encountered one another.

Finally on the floor of the second space stands a low white platform with an upward sloped overhang concealing the presence of a rock, residing on the platform, from one vantage point. Closer inspection reveals that there is not just a section but a full rock hidden beneath the pedestal, its top sticking out of the platform much like an iceberg sticks out of the water. This such clumsily camouflaged rock- a hidden object inside its display platform, waiting for an action, or a moment to ambush our attention - forms the very essence of Williams’ work and at the same time lucidly confirms Ad Reinhardt’s definition - sculpture is an object you trip over when you step back to look at the painting.

The project is supported by the Ministry of Education, Science, Culture and Sport of the Republic of Slovenia

Cori would like to thank her Family, Kelly Kaczynski, Allyson Vieira, Donna Mintz, and a special thanks to Tobias Putrih for helping to make this show a reality. She would also like to thank everyone that assisted her while in Ljubljana, "hvala!".
www.gregorpodnar.com