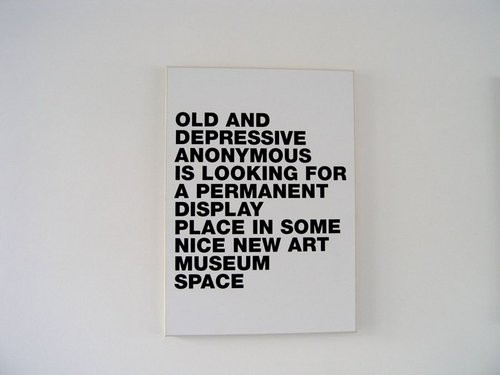 Galerija Gregor Podnar is pleased to announce the opening of the exhibition
Anonymous Post Post Modern Modern Artist, which presents a group of works
created by Goran Trbuljak between 1980 and 2008 that treat the general theme of
the artist in depression or crisis.
Humor and self-deprecating irony are characteristic aspects of these works, which
examine issues of authorship, anonymity, and originality, as well as, most
prominently, the status of the artist in a given cultural system. The work on canvas
OLD DEPRESSIVE ANONYMOUS IS LOOKING FOR A PERMANENT DISPLAY
PLACE IN SOME NICE NEW ART MUSEUM SPACE (2005–08) consists of eight
pieces with seven variations in such elements as “OLD IS NICE,” “DEPRESSIVE
MUSEUM,” and “ANONYMOUS PERMANENT.” In another work, To Myself (2005),
the artist presents himself with a guide for appropriate behavior, raising questions
about who is really being addressed here. The earliest work in the exhibition, Artiste en Crise (1980–81), juxtaposes in four photographs images of the artist’s hands and head with the words “Artiste en Crise” to express the artist’s feeling that he is incapable of great achievement and doomed to failure.
A pioneer of conceptual art in the former Yugoslavia, Goran Trbuljak began his
career in Zagreb in the late 1960s with works that critiqued the institutions of art and questioned the nature of the artwork. Consequently, his art took unusual forms: calling cards left for gallery staff, opinion polls that demanded a response, and even a “referendum” of passers-by in 1972 in Zagreb on the question, “Is Goran Trbuljak an artist or not? 1. Yes 2. No.” In the mid-70s, Trbuljak entered into a dialogue with painting: The Sunday Painting (1974), for instance, is in fact a photographic documentation of one of the artist’s street actions: on several different Sundays, Trbuljak went to an art-supply store and painted on the display window in correlation with the blank canvas and easel behind the glass. Each Monday, the store’s staff would remove the paint from the window.
The Zagreb-based art critic and curator Branka Stipančić writes of Trbuljak: “He was the first artist in Croatia to question the meaning of exhibiting work within the gallery system, and the status of an artist as part of this, integrating such questions into his art. Every new step in art was always an ethical issue for Trbuljak. His influence on the generation of post-conceptual artists in the mid 1970s was decisive.”
Trbuljak’s work has been shown in numerous exhibitions, including CONCEPT HAS
NEVER MEANT HORSE at the Generali Foundation (Vienna, 2006), the Croatian
exhibition at the 51st Venice Biennial (2005), and Short Careers at the Museum
Moderner Kunst (Vienna, 2004)
www.gregorpodnar.com