I Heard You Laughing 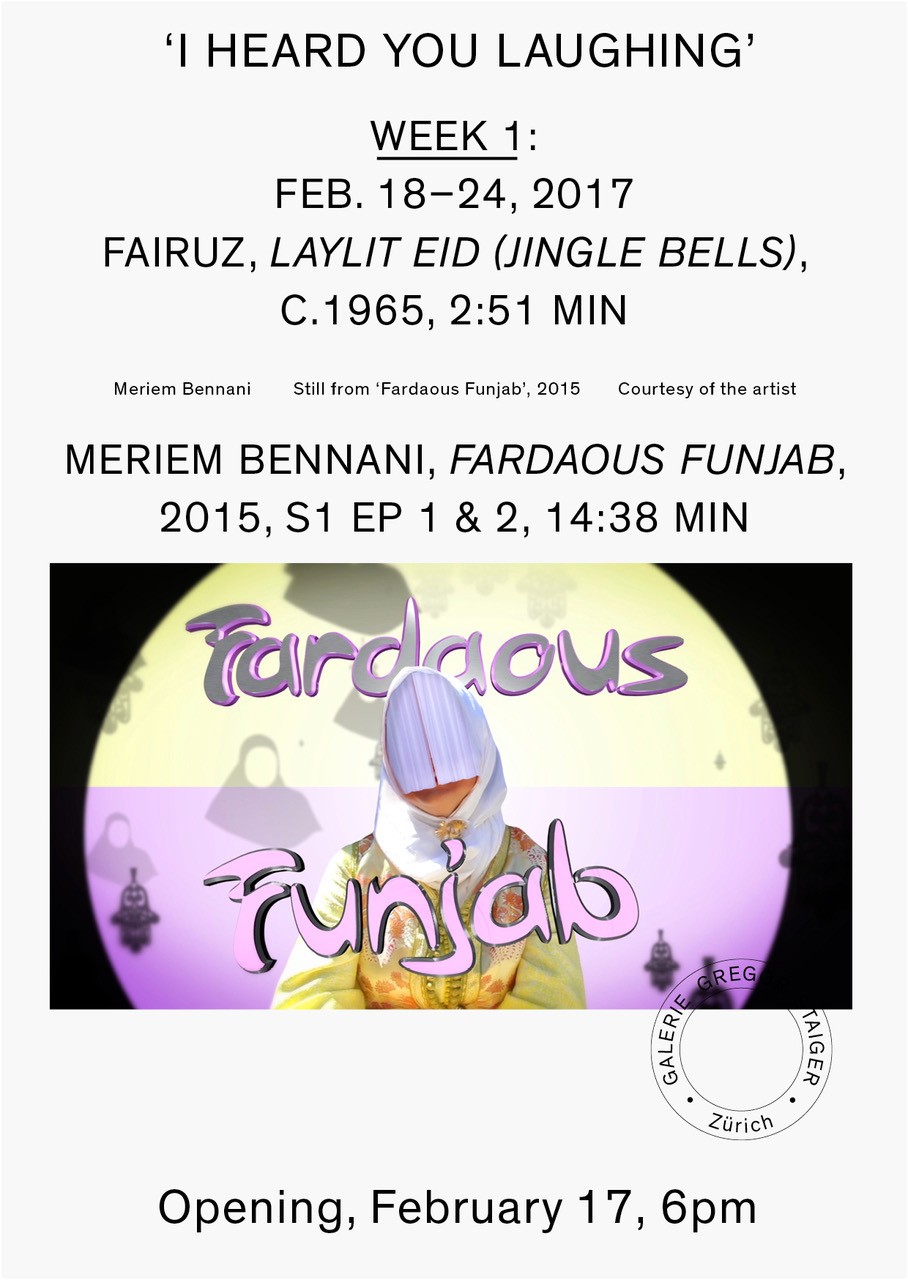 
Artists from the Middle East are often associated with narratives of struggle and rhetoric of the past. Some end up making works that are almost a response to a Western "tacit commission"—as coined by Moroccan scholar Mohamed Rachdi—arbitrarily linking authenticity with traumatic storytelling. ‘I Heard You Laughing’ borrows its title from 14th century Persian poet Hafez's book "I Heard God Laughing," where he lauded the joys of love, humor and irony, three clogged pillars of Middle-Eastern culture that are making a controversial comeback in the works of a younger generation of artists from the region.
This six-week long series of screenings reflects on the importance of popular culture, the omnipresence of technologies and the role of music and dance, while tackling a form of vernacular disorientalism and conveying a certain digital cosmopolitanism. It comprises selected music videos from iconic Middle-Eastern musicians of the 1950s-60s-70s alongside video works by contemporary artists that reflect the complexities of this often oversimplified 'East-West' configuration.

Every week an artist’s film will be paired with a music video and screened on loop at the gallery space. A final screening and talk with the curators will be organized at the end of the exhibition.


Martha Kirszenbaum (b. 1983, Vitry-sur-Seine, France) is a curator and writer based in Los Angeles, where she was the Director and Curator of Fahrenheit, an exhibition space and residency program (2014-16). She graduated from Sciences Po in Paris and Columbia University in New York, and worked at Media Department of MoMA in New York (2006-07), the Photography Department of Centre Georges Pompidou in Paris (2007) and at the New Museum in New York (2008-10). Additionally, she collaborated with the Center for Contemporary Art in Warsaw, the Belvedere Museum/21er Haus in Vienna, the Marrakech Biennale, Palais de Tokyo in Paris and the Kunsthalle Mulhouse. Kirszenbaum is a regular contributor to Flash Art, CURA, Kaleidoscope and Mousse, and has led seminars on curatorial practice at the Université Paris VIII and Parsons, Paris.

Myriam Ben Salah (b. 1985, Algiers, Algeria) is a curator and writer based in Paris, where she has been coordinating special projects and public programs at Palais de Tokyo since 2009, focusing especially on performance art, video and publishing initiatives. She is the Editor in Chief of KALEIDOSCOPE magazine’s International Edition. She co-edits F.A.Q., a periodical image-only magazine with artist Maurizio Cattelan, and her writings have appeared in numerous international art publications. Her latest curatorial projects include Cool Memories (Occidental Temporary, Paris, 2016), Like the Desert Miss the Real (Galerie Steinek as part of « Curated-by », Vienna, 2015), Dirty Linen (DESTE Foundation at the Benaki Museum, Athens, 2015), Shit and Die (Palazzo Cavour as part of Artissima collateral program, Turin, 2014).
www.gregorstaiger.com