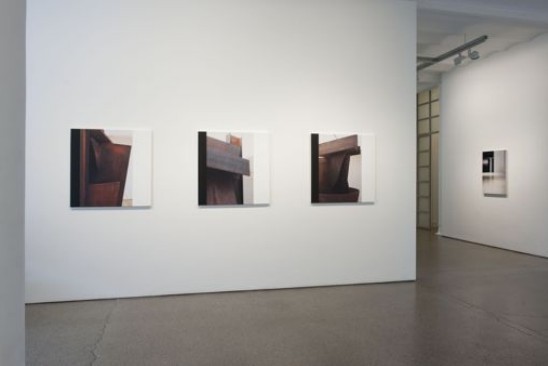 Eric Baudelaire (Salt-Lake-City, USA, 1973) is a Paris based artist who’s work strongly evolves around the conflictive and complex relationship between fiction and reality, exploring those areas where the line in between blurs, where meanings shift. The photograph Etats Imagières (Plantation) is part of the awarded series ‘Imagined States’, not coincidentally shot in the only partially recognized state of Abkhazia.

Photographic Views from a Wall by Inaki Bonillas (Mexico, 1981) is exemplary of the artist’s early practice, dominated by a fascination for the photographic process. The piece belongs to a larger installation where the artist captured the same white wall with nine different techniques or devices, resulting in just as many ‘shades of light’. Yet Bonilllas’ rational approach towards his medium, his ‘meta-photography’ as Dieter Roelstrate once appointed it, never endangers the esthetic subtleness and poetic qualities of his work.

The two ‘photographs’ in this exhibition that were conceived without relying on any photographic device belong to Sylvie Eyberg (Brussels, Belgium, 1963). The Belgian artist composes her works, characterized by an unconventional cut and a granular texture, from found images, which are recovered integrally or just partially, extracting certain details. The combination with other images or with text fragments, as in 2000, 22,5 x 28 cm, celebrate the heydays of American Conceptual Art.

Louise Lawler (New York, USA, 1947) established her artistic reputation in the 1970s with a photographic genre, referred to as ‘Appropriation Art’. Lawler captures works by well-known international artists, focussing her analytic eye on the context and presentation of the work and as such challenging the Minimal Art objective of the autonomous artwork. The main protagonists in this show are Lucio Fontana (1899-1968) Skin from Angola, Bought in Portugal and Sol Lewitt (1928-2007) Black and White and Blue (more than a detail).

Thomas Struth (Geldern/Niederrhein, Germany, 1954) is a disciple of the objective, scientific method of photographers Hilla (1934-) en Bernd Becher (1931-2007). The Rothko Chapel belongs to the series 'Houses of Worship', commissioned by The New York Times. In the light of the unambigous function of Medieval and Renaissance Art in religious spaces, Struth examines the presence of Modern and Contemporary Art. By times interventional, by times harmonious but never compromising the sacred and contemplative character of its surrounding.

In his sculptural work, Didier Vermeiren (Brussels, 1951) acts on a meta-level, approaching the main themes of art history and theory; production methods, the significance of the base, the relation between mould and form, between presence and absence. His photographs partly serve as a document; partly correspond to these explorations. The Lenticular Photographs show a technique that is rather unconventional but fully complementary to the subject: his own sculptures in the studio.

Ian Wallace (Shoreham, U.K., 1943) has helped establish, what is referred to nowadays as, the ‘Vancouver school’, ‘Photo conceptualism’ or ‘Post-conceptual Photography’, leaving the studio for the street, approaching his subject as an observer, sociologist and historian. With Abstract Sculpture (Up North) his oeuvre takes on a new dimension. Wallace departs from a sculpture by British contemporary artist Anthony Caro (1924). Through the photographic medium and specific choices of lighting and angle, the artist examines the tactile and reversible character of seemingly fixed aspects such as shape, temperature and texture.
www.galeriegretameert.com