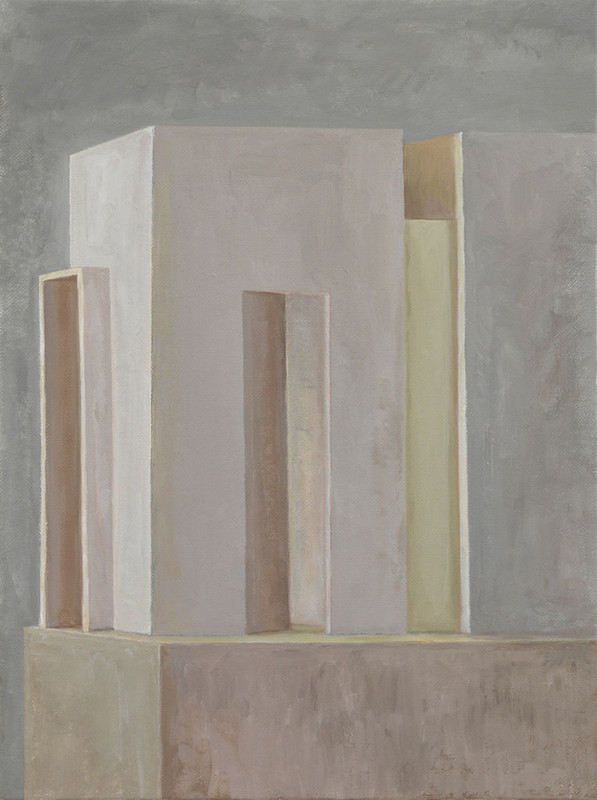 Albrecht Schäfer
Interieur 7, 2015
Oil on canvas
40 x 30 cm
Was vom Tag übrig bleibt, the title of the exhibition, playfully refers to the German translation of the novel and eponymous movie, The Remains of the Day (Was vom Tage übrig blieb). The one significant difference lies in the verb tense which, removed from past to present tense, shifts the notion of closure and conclusion towards an indefinite continuity. This shift also lies at the heart of a basic constant in the artistic works of Albrecht Schäfer. His oeuvre, which covers a large variety of media although in recent years he has dedicated himself predominantly to painting, neither seeks out a singular event nor one that attracts all the attention as its subject.

Irrespective of the many different artistic means of expression (installation, frottage, painting), all of which are represented in this exhibition, the visitor can distinguish a common basic tone, which has developed from the artist’s grappling with fundamental categories of human existence. Nothing less than time and space are addressed here, as well as light and matter, which are intertwined or set against each other.

Whereas, at first sight, his paintings seem to focus on the appropriation of a space, the two chains consisting of small, painted wooden cubes, with their sequence of chromatic hues or light exposure values, refer to a temporal process. Indeed, the large newspaper work consisting of 49 pieces even names the German weekly paper Die Zeit explicitly in its title.

The artist’s studio space is the only subject of his paintings. However, he does not adhere to the traditional notion of an artist’s workshop, one that would usually show the artistic process, the creativity or the imaginative wealth of the artist by presenting numerous objects – quite the contrary. Albrecht Schäfer reduces this space to a minimum of elements: walls, windows, floors, ceilings, shelves ... The process of reducing things to their essence unfolds first of all via abstraction – by creating a cardboard model of the artist’s studio, which then serves as a template for defining the pictorial invention. Such a form of reducing visual scope and content can either allow him to show the studio in its entirety or to merely highlight excerpts, fragments and details. Turning away from the real space and towards a model variant thus offers him the possibility to both visualise views of the space as such and views of the objects within the space. At the same time, this shift in perspective also allows him to address the possibilities of painting in general. The creative process of painting is brought to the fore here. It is still oriented on reality but it ‘only’ perceives this reality via a mediator – the model.

Ultimately, the effect is that the perception of the onlooker is detracted, away from the being, away from the imagination of reality and instead toward the (visual) language, toward the construction or the medium of painting. This impression is even more enforced by the stage-like quality of the spaces, which call to mind pictorial compositions of the Early Renaissance, such as those by Giotto. Furthermore, the explicit focus on these spaces as places of presentation – at times, a plinth holds the arrangements, at others we discern a table or even just a fleetingly suggested edge – serves as a reference: alongside a phenomenological debate carried out with the means of painting, it is also a profound reflection of art history – calling to mind Giorgio Morandi or Giorgio de Chirico, to name but a few.

All of these aspects make the space seem questionable and ambiguous. The viewer’s perception constantly fulfils a balancing act between recognizing the subject and acknowledging the pictorial process or, as Ernst H. Gombrich described these two forms of perception so acutely in his fundamental study, Art and Illusion, “One cannot surrender oneself to an illusion and observe it at the same time.”

It is exactly these permanent shifts and changes that constitute the challenge of Albrecht Schäfer’s paintings, a process which is furthermore continued in other works shown in the exhibition. Whereas the chains seem to hang in the space as apparently equal objects, they still refer to two extremely diverse ways of creating and observing – light vs. matter. Whereas one chain shows the various exposure values of the white studio wall during the different times of day, the other visualises the chromaticity of the paintings.

What is visible, and how do we perceive? What else might a sign mean? What changes in the process of translation or transformation from one medium to the next or throughout the passing of time? What information, data of perception, what thoughts remain? These are the kind of questions that connect all of the works exhibited here. It is what the frottages are about as much as the large-format newspaper work. This, by creating a colour value made of a sheet of newspaper that consists of a multitude of textual and visual information, then leads to a further and entirely different kind of information: the average colour of all items of information taken together. This, in turn, creates a new category of perceiving. The fact that Albrecht Schäfer manages to bring this about over and again so convincingly in his works is proof of a philosophical view of the world by which his works eventually show that what remains of the day – perhaps a primary colour.


Albrecht Schäfer (*1967, Stuttgart) lives and works in Berlin. He studied at the HfBK Braunschweig, at the Chelsea College of Art and Design, London, and at the AdBK Munich. Since 2010 Schäfer holds the professorship for Sculpture at the Weißensee Kunsthochschule Berlin. Schäfer has received numerous prizes and scholarships, amongst others the H. W. & J. Hector Kunstpreis prize of the Kunsthalle Mannheim (2006). His most recent solo exhibitions were shown at the Goethe Institute Dublin (2012); Museum Morsbroich, Leverkusen (2010); Kunst-Werke Berlin (2008); Kunsthalle Mannheim (2007), Kunstmuseum Stuttgart (2006). Albrecht Schäfer’s group exhibitions include: Hamburger Bahnhof – Museum für Gegenwart, Berlin (2012); MARTa Herford (2011); Muzeum Sztuki Nowoczesnej, Warsaw (2010), and Martin-Gropius-Bau, Berlin (2008). Furthermore, Schäfer has realised various ‘Kunst-am-Bau’ (commissioned) projects, amongst others for the Olympic Village in Munich, the headquarters of the Bundesbank in Berlin, the Max-Planck Institut in Tübingen and the Hochschule für Bildende Künste Braunschweig.
www.grieder-contemporary.com