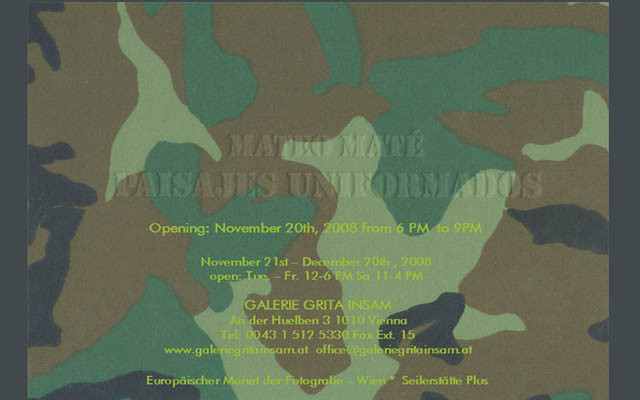 “The art of deception”
Camouflage is the technique that allows an organism, object or person to be imperceptible or invisible in the environment surrounding it; it is the art of invisibility or of deception, of appearing to be what you are not or appearing not to exist.

The concept of camouflage was already well known in ancient times. Man mimicked his surroundings in order to hunt. There are drawings in prehistoric caves of men disguised as animals. In the Bible references are made to the false prophets as “wolves in sheep’s clothing” who deceive honest people. The Grimm brothers also warned us about these bad characters who, to win our trust, sweeten their voices with egg white and cover themselves with flour. In Nature, many animals have evolved the technique of passing unnoticed. In 1896 an American artist, Abbott H Thayer (1849-1921), analysed the colouring and shapes of the animals to mimic the environment in an article.

Since ancient times, military uniforms were made in bright colours. Decorated and very impressive, they represented the power of the sovereign or of his nation and their functions were to promote each unit’s cohesion and identification. It was not until the end of the 19th century that the British troops in India had to conceal their red tunics and change them for others made in Khaki green. They managed this by simply dying the cotton with tea. In 1902 in England, the United States, Russia, Italy and Germany started to use khaki and green for the uniforms of some units in their armies.
In 1914 the French artist, Louis Guingot designed the first camouflage suit. It was a kind of raincoat painted with tiger stripes. The invention was not immediately applied to the uniforms, but it was started to be used to conceal artillery and land emplacements. Painted in this particular way they could not be discovered from the air by the black and white photographs of the time. In 1915, the French army created the first camouflaged division in the world. All the Western armies were quick to integrate hundreds of artists into their camouflage units to develop this particular “war art”. Ships, aeroplanes, artillery and uniforms were analysed and painted in very different ways to conceal them and to deceive the enemy.
Military camouflage would not exist without the discovery by the pre-impressionist and impressionist artists of a language and a peculiar plastic iconography. These artistic movements stripped down all the natural elements in a landscape to their basic shapes, and reinterpreted them as spots and colours just as the human retina perceives them at a first glance. A few years after this discovery, and showing us that there is no human invention that is harmless and that does not have possibilities for perverse use, the uniforms of the armies throughout the world radically changed their idea; they went from being a representative element of the power to being offensive weapons, although passive ones. The plastic language of the impressionists had been turned into a weapon.
During the Second World War all the Western powers had specific departments for developing camouflage. Jean-Louis Forain, Andre Dunoyer de Segonzac, Jacques Villon, Grant Wood, Thomas Hart Benton, Norman Wilkinson, Everett Warner, Sherry Fry, Barry Faulkner, Homer Saint-Gaudens, John Singer Sargent, Frederic Waugh, Edward Seago, Blair Hughes-Stanton, Charles Burchfield, Oskar Schlemmer, Franz Marc, Edward Wadsworth, William Stanley Hayter, Roland Penrose, Julian Trevelyan, Eric Sloane, Laszlo Moholy-Nagy, Gyorgy Kepes, Jon Gnagy, Arshile Gorky, Victor Papenek and Ellsworth Kelly, were some of the artists who handed over their visual codes of how we perceive Nature, decoded by their impressionist predecessors for use in wars. From this moment onwards, using a basic, but highly sophisticated applied iconography, the uniforms imitated the natural surroundings where the different corps of the armies were going to be deployed. By the middle of the 20th Century we can already find uniforms that evoke a picnic in the French countryside and others, an expedition to a South American jungle.

This project attempts to demonstrate two ideas. On the one hand, empirically denouncing a silent and ill-intentioned robbery, to perform an act of justice, I am trying to return to art what war has stolen from it. With the textures of the highly different uniforms of the armies throughout the world I am trying to recompose and return this iconography to the original artistic works. To describe each texture, type of land, vegetation or the climatic phenomena that define a landscape for us in the paintings, there is, in some unit of some army on the planet, the uniform that will provide us with the raw material as if it were a tube of paint.

On the other hand, the idea is to show how the concept of camouflage has seeped into virtually all the human social activities. Over the past century, the companies have developed acquiring a power that is even greater than that of the countries and they have invented the science of marketing that camouflages objects in dreams. All humans use the different brands, like a second skin to integrate ourselves into the social group of the sheet to which we want to belong; the products that we use do not project what we are; they project what we want to be or just want to appear. The economic power has kidnapped the sense of sight that was until recently a “notarial act of the truth”. Polyespan, Photoshop and plastic surgery have turned our surroundings into a theme park in which the objects, messages and bodies are false. The eternal sentence “if I hadn’t seen it with my own two eyes, I would not believe it” no longer has any meaning. However we continue believing it because we are all actors on the same stage; with leading or supporting roles, but accomplices in different degrees. Currently, the military look has spread throughout the social strata. The large clothing chains offer us every day garments for going to school or work that are camouflaged; the houses on the new estates acquire the presence of unassailable bunkers in the same style as the kibbutz’s in the “occupied territories”; even the vehicles have been contaminated by the armour plating appearance of the Empire’s war ships.
With the total militarization of all our borders, implanted with the excuse of security, we are all ready for a general mobilisation. We do not know when or where the conflict will arise, but we must be ready for it.