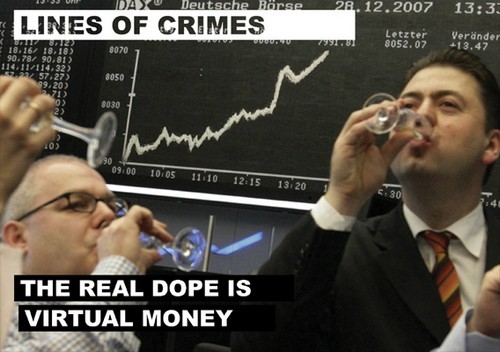 Lines of Crimes is the title of the central work of the correspondent exhibition. A photo print is mounted horizontal in a box and covered with glass. The image shows the white line of the diagram of the stock exchange quotation but it is drawn by a cocaine line, which can be „snort“ by using a rolled up 100 euro bill. A group of businessmen are celebrating with glasses of champagne in front of it. The subtitle of this work „The real dope is virtual money“ finds it‘s explication in the analogy of the phrase „cut a line“ and the „lines“ of the stock exchange quotation.
This part of the exhibition deals with the social consequences of the modern financial architecture. A favela-cottage, built up of rubbish, symbolizes the fragile construction of financial management. A series of photographs of empty factory-spaces and damaged production facilities scrutinize the sentence „Bankers do it better“.

Furthermore a photography of larger size reflects on the influence of „high policy“ on companies. The G8-Summit has been staged for that image while politicians are shown only as portraits in the back. On their place are sitting eight people – “heavily affected” by their policy.
The sculptures broach the issues of the social gap of the financial hierarchy, too. A villa is swimming on the water like an iceberg while family houses are underneath and “under water” and carrying the „floating mansion“.
In analogy to that six money bags with the inscription „Steuer“ (=taxes) symbolize the struggle for survival of employees – they are nearly drown and “under water”as well.
Both sculptures function as visualisations of the thesis that the wealth of some people base on the poverty of others.
A glass cube, filled with newspapers, casts a shadow. This represents as a triangle delta form the “hard shadow” of media. On the glass “media tower”one can read words and texts created by media theoreticians. This sculpture aims to demonstrate and discuss the role of the mass media with regard to politics and economy.
The exhibition of the modern financial architecture is completed by two „Memory boards“, a series of photocopies of book pages and aphorisms by Peter Weibel are arranged densely. You can find explanations there for the abstract financial system and techniques.
www.galeriegritainsam.at