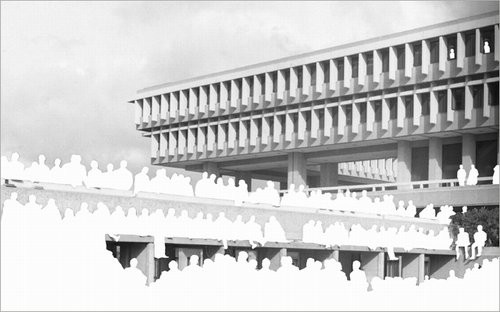 The current exhibition by the artist duo of Sabine Bitter and Helmut Weber at Galerie Grita Insam plays out before the backdrop of the current discourse on education policy. Specifically, this presentation links student strikes in Vienna, Vancouver and elsewhere with historic conflicts. The works on display take on these debates using the modernist architecture of Simon Fraser University in Vancouver as an example.

In a space installation, in photo-architecture drawings and in black-and-white photographs, the two artists deal with the historical anchoring of the current discourse on “education vs. professional training.” The exhibition’s title refers to this paradox situation at the universities, caught up as they are between the conflicting factors of economic autonomy and the freedom of education and research.

In the wall tapestry Templeton Five Affair, March 1967, the protagonists of a demonstration are seen only in silhouettes before the university building. In this “split” between “actors” and architecture, the artists refer to the thesis by Henri Lefebvre according to which architecture is defined by social interaction.

The analytical, research-oriented artistic practice of Bitter / Weber can be seen in their production of images by co-opting, reconstructing and reworking documents and archival materials, as well as in the reference their work makes to concepts and technologies of analog and digital image creation.

Here, as in earlier works, the two artists understand spaces to be aesthetic and political constructions. With the technique of the “collage as a research method,” Sabine Bitter and Helmut Weber refer to informational content which is inscribed into specific places, thus representing spaces.
www.galeriegritainsam.at