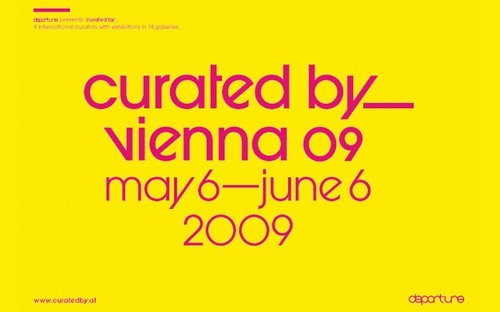 INSIDE JOB is an exhibition that brings eight artists together, four of them in their respective galleries, and four of them as invited artists in the same locations. INSIDE JOB forms part of curated by_vienna 09, an innovative project that connects eighteen Viennese contemporary art galleries with international curators of high distinction. Scheduled to coincide with VIENNAFAIR (May 7-10, 2009; VIENNAFAIR VIP opening on May 6, 2009), curated by_vienna 09 is intended not only as a showcase for the high level Viennese gallery scene, but also demonstrates a commitment to exploring novel forms of cooperation between curators and galleries.

The title INSIDE JOB references the slang term for a robbery committed with the help of a knowledgeable insider, but it primarily points to the status of the exhibition itself, as a phenomenon that employs both the structure and artistic content of an art gallery, while remaining semi-autonomous from that structure. To the exhibition curators, the space articulated by the curatorial process is one in which each curator’s direct experience of the particular history of the four galleries is a fundamental tool in shaping the selection and dialogue with each participating artist. For the viewing public, the curator might appear as the ultimate insider, but the unusual pretext for curated by_vienna 09 offers a certain incongruity, in the sense that the curator has neither invented the concept nor selected the spaces, but instead developed a new proposal while working within a relatively narrow given context.

The four separate installations in INSIDE JOB occurred with specific visual dialogues unfolding between the two artists exhibiting in each space. At Galerie Grita Insam, a recent sculptural installation by KARINA NIMMERFALL takes the form of a tabletop architectural maquette set against a projection screen. The square building presented in model scale was characterized by blue windows set into a open-framed modernist grid, while on the adjoining screen a looped video of Manhattan envisions a small fire blazing away in a place where it is barely noticed. Nimmerfall’s work is accompanied by a series of works -- one of which is also a maquette -- created by WALTERCIO CALDAS using materials gathered in Vienna. For Caldas the challenge was to respond to the gallery as a found site using store-bought materials, and his disarmingly simple works function equally as objects, pictures, and site-specific events interpreted through physical materials.

At Galerie Krinzinger, a multi-layered installation in one room by SHILPA GUPTA juxtaposed three quasi-narratives elements: a wall of light bulbs spelling out the phrase, “The World Changes a Little Bit Every Day;’ an old-fashioned microphone head from which we hear the artist’s voice reciting a child’s poem about clouds, as the microphone is slowly lowered to the floor then raised to the ceiling; and a stack of photocopies (viewers can help themselves) of an erratic/poetic letter to the artist’s landlord in Bombay. Alone in the adjoining room, and tying the elements together, is a large photograph of a group of dozens of Indian boys gazing together, with looks of hope and determination, into the future. HANS OP DE BEECK was represented by a group of large drawings connected to the 2009 version of the extended animated film Extensions, which was simultaneously projected in an adjoining room. With a dreamlike sequence of images and events, a hypnotic soundtrack, and ongoing Chinese characters providing the storyline, Op de Beeck’s film is a hypnotic journey through a series of enigmatic scenes.

At Galerie Layr-Westenheugen, an unusually dynamic counterpoint was set up between the single artist KOKI TANAKA and the collective MAHONY. Like Caldas, Tanaka arrived in Vienna empty-handed, and developed his project using materials found and purchased for the occasion. The main difference with Tanaka’s project, however, was that he used everyday objects to create mini-performances inside the gallery, which were videotaped and presented to the public both as documentation and as post-performance residue. In an adjacent room, a selection of recent objects created by Mahony, including a large handmade banner, referenced a recent expedition to South America, and a third space brought the artist and group together, with individual works that appear as if they might have been made by either one.

Entering Galerie Nachst Sr. Stephan Rosemarie Schwarzwalder, the first thing one encounters is a large open room containing a four-wall work by KARIN SANDER. Consisting of what appears to be an endless computer programming formula, the work is actually a literal transcription, in code, of the dimensions of the room in which one is standing, thereby setting up the possibility that one could use the work itself to reconstruct the space where it is being displayed. The gallery’s second room introduces a cluster of works by IGNASI ABALLI, beginning with three photographs of the polished wooden floor of an art gallery, in which one can see the brightly colored reflection of conventional paintings hanging on the wall. A single framed collage contains numerous citations of the word ‘color’ in black-and-white type, while an adjacent space serves as the projection room for a video in which an entire Godard film, shown on a gallery wall, can be viewed by way of its reflection onto the wooden floor.

INSIDE JOB will be on view until June 6, 2009, allowing interested visitors to see the four exhibitions on the eve of the Venice Biennale and through Art Basel in June 2009.
www.galeriegritainsam.at