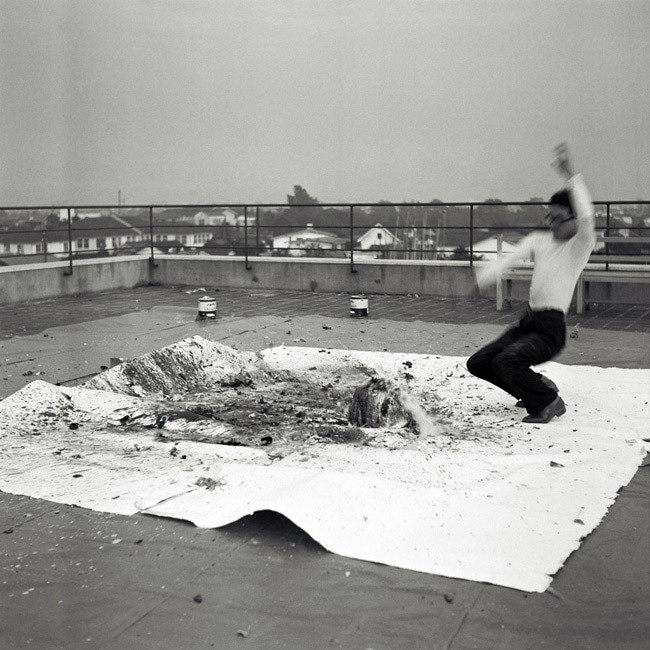 Gutai: Splendid Playground presents the creative spectrum of Japan’s most influential avant-garde collective of the postwar era. Founded by the visionary artist Yoshihara Jirō in 1954, the Gutai group was legendary in its own time. Its young members explored new art forms combining performance, painting, and interactive environments, and realized an “international common ground” of experimental art through the worldwide reach of their exhibition and publication activities. Against the backdrop of wartime totalitarianism, Gutai forged an ethics of creative freedom, breaking through myriad boundaries to create some of the most exuberant works and events in the history of Japanese and international avant-garde art. Yoshihara’s Please Draw Freely (1956/2013), a collective drawing on a freestanding signboard reconceived for the Guggenheim’s rotunda and created by visitors, invites adults and children to collaborate, think, and imagine for themselves.

The Gutai Art Association (active 1954–72) originated in the cosmopolitan town of Ashiya, near Osaka, in western Japan. Spanning two generations, the group totaled 59 Japanese artists over its 18-year history. The name “Gutai” literally means “concreteness” and captures the direct engagement with materials its members were experimenting with around the time of its founding in 1954. From its earliest festival-like events, Gutai artists sought to break down the barriers between art, the ordinary public, and everyday life, and continuously took on new artistic challenges using the body in direct action with materials, time and space, and nature and technology. Charting Gutai’s creation of visual, conceptual, and theoretical terrains, this exhibition is organized throughout the museum in chronological and thematic sections: Play, Network, Concept, the Concrete, Performance Painting, and Environment Art.

The outdoor exhibitions of 1955 and 1956 literally set the stage for the group’s artistic strategies. Held in a pine grove park in Ashiya, these events brought art outside and released it from its confines, like Motonaga Sadamasa’s magisterial Work (Water). The Guggenheim commissioned the artist to recreate this work for the rotunda, where he hangs common, polyethylene tubes of varying widths filled with brightly-colored water between the rotunda levels, making giant brushstrokes out of catenaries in the open air that catch the sunlight (Work [Water], 1956/2011).

Moving from what Yoshihara decried as “fraudulent . . . appearances” to lived reality, Gutai artists invented ways to go beyond contemporary styles of abstract painting into concrete pictures, blurring representational significance by incorporating raw matter, as well as time and space, as the stuff of art. Tanaka Atsuko’s Work (Bell) (1955/1993), reimagines painting as an acoustic composition of living sound through a sequential ringing of electric alarm bells wired along the entire expanse of Rotunda Level 2. Her interests in schematic and technical representation, wiring systems, lights, and the human form reached a pinnacle in her best-known work, Electric Dress (1956). The artist wore this spectacular costume made of flashing incandescent light bulbs painted in bright yellow, green, red, and blue for her performance during Gutai Art on the Stage (1957), whose documentary film is projected on Rotunda Level 5.

Like Art Informel and Abstract Expressionism, Gutai rejected psychic automatism for acts of corporeal materiality in the real world. Yoshihara’s involvement with the revitalization of Japanese traditional arts, specifically Japanese calligraphy, also informed his idea of art making as an unmediated experiential encounter between artist, gesture, and material. Shiraga Kazuo’s Untitled (1957), made by the artist painting on the floor with his bare feet, or Murakami Saburō’s Passage (1956), a performance painting made by the artist flinging himself through taut paper screens, both demonstrate Gutai’s call to release the “scream of matter itself.” In the context of live events, Gutai artists extended their objectives to theater, music, and film. The Gutai Card Box (1962) transformed the act of viewing paintings into an interaction, with the viewer purchasing a work from the artist hidden inside a vending machine.

As the global pioneers of environmental art, Gutai’s participatory environments take the form of organic or geometric abstract sculptures incorporating kinetic, light, and sound art, turning exhibition spaces into chaotic dens of screeching, pulsing, machine-like organisms. Yoshida Minoru’s erotic machine-sculpture Bisexual Flower (1969) mines the psychedelic effects of this approach. Gutai environments drew from contemporary architecture, technology, and urban design to promote a futuristic, space-age aesthetic. This can be seen in Nasaka Senkichirō’s giant armature composed of aluminum plumbing pipes punctured with holes, broadcasting a music composition as it zigzags its way up the exhibition space. This site of creativity is what Shiraga called “a splendid playground” and what Yoshihara sought as a “free site that can contribute to the progress of humanity.”

Gutai: Splendid Playground is supported in part by the Henry Luce Foundation.