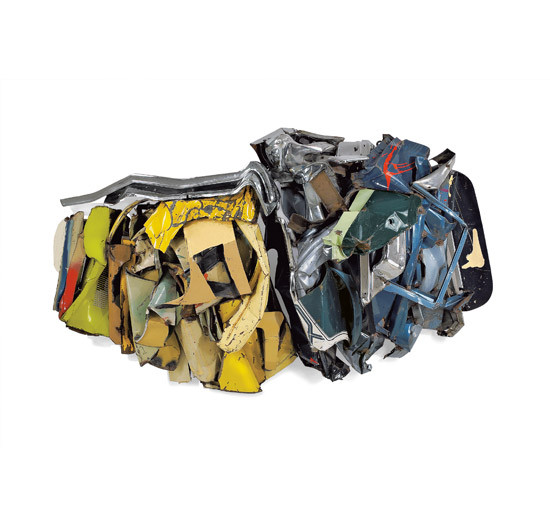 Often identified as the artist who successfully translated Abstract Expressionism into three dimensions, John Chamberlain’s path to art wound through Franz Schubert, the U.S. Navy, hairdressing, the Art Institute of Chicago, and the Black Mountain College poets. In Chicago, Chamberlain admired the work of Willem de Kooning and David Smith and learned to weld. Black Mountain instilled in him an intuitive collage sensibility and an approach to language that favored the visual appearance and sounds of words, dissociating them from their definitions.

Chamberlain moved to New York in 1956 and within a few years hit upon the decision to utilize car metal as art material. His sculptures hewn from automobiles inevitably attracted the wrong interpretation; where Chamberlain employed creative re-use, others saw simply car crashes. He spent the rest of his life outrunning that association. His primary concern was and continued to be three-dimensional abstraction. More sensitive observers noted a kinship between his works and the dramatic modeling and contrapposto of Baroque art and sculptural drapery studies.

With collage—the juxtaposition of heterogeneous elements—and abstraction—the elimination of figurative imagery—as guiding principles, Chamberlain articulated the maxim that permeates his entire oeuvre: “it’s all in the fit.” Throughout his career, modulations in scale and medium provide a vital rhythm to his development. The sculptures range from the size of a fist to the girth of a generous hug to the height of a young, and eventually not so young, tree. Swelling and shrinking, in coats of multicolor, monochrome, or black-and-white paint, the survey of Chamberlain’s career displays the integrity of the artist’s gesture in diverse manifestations. Despite his commitment to abstraction, identifying anthropomorphic and zoomorphic traits in the lyrical, twisting forms is irresistible. Their playful titles are planted like so many red herrings: Belvo-Violet (1962), Miss Lucy Pink (1962), Rooster Starfoot (1976), Lord Suckfist (1989), and SPHINXGRIN TWO (1986/2010).

Chamberlain brazenly defied the taboo of color in sculpture, a holdover from the rhetoric of medium specificity surrounding Abstract Expressionism (materials should be true to themselves, therefore color is the business of painting), which was still influential in the 1960s and considered one of the foremost problems in sculpture at the time. He originally circumvented the controversy by pleading that his color was found straight off of the assembly lines and highways of America. Shortly thereafter, he began to apply new paint to the metal, intervening in ever more elaborate ways with the surfaces of his materials. There are examples of airbrushing from the 1960s, drips and pours from the 1970s, sandblasting from the 1980s, and freehand and stenciled patterns from the 1990s forward.

Amassing a body of work that could not be ignored, Chamberlain has been clumsily shoehorned into a variety of ill-fitting categories. Perhaps the most fertile of these is the retroactive link with Abstract Expressionism. His choice of vernacular materials also tied him to Pop. These same materials understood as products of standardized manufacturing associated him with Minimalism, encouraged by the unwavering critical support of Donald Judd. His method of assembly drew him toward Neo-Dada. He remains the inveterate rebel without a tribe, while still being recognized as a standard-bearer of sculptural practice.

Driven by the pursuit of what he does not already know, the desire for unprecedented information and knowledge, Chamberlain turned away from car metal to experiment with new materials for a period. In the summer of 1966, he began squeezing and tying urethane foam. A succession of sculptures in other mediums followed: he crushed galvanized steel boxes that he had fabricated at the enlarged dimensions of a cigarette pack, he treated paper bags with a technique he called “articulate wadding,” he melted and vacuum-mineral-coated Plexiglas boxes, and he crumpled aluminum. He also made films and videos, notably the cult art classic The Secret Life of Hernando Cortez (1968). By the mid-1970s he returned to automobile steel with renewed vigor.

In recent years Chamberlain used vintage cars (formerly junk) of similar stock to the materials he started out with in the late 1950s. The sculptures grew in scale and possess a new-found gravity. He also embarked on the production of monumental aluminum sculptures, based on works that fit in the palm of the hand, which he had been making since the mid-1980s. His creations of the last five years stand as self-assured totems or sentinels at the culmination of nearly six decades of art making. This retrospective gathering of works celebrates the remarkable legacy of John Chamberlain, whose passing on December 21, 2011, we acknowledge with heartfelt remembrance.