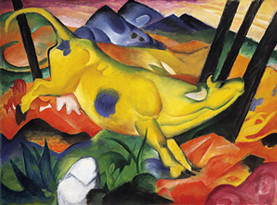 Franz Marc, Yellow Cow (Gelbe Kuh), 1911. Oil on canvas, 140.652 x 189.23 cm. Solomon R. Guggenheim Museum, New York. Solomon R. Guggenheim Founding collection
Solomon R. Guggenheim, with the guidance of the artist Hilla Rebay, was a champion of a particular strand of abstraction, known as non-objective art, which had no ties to the observable world and aspired to spiritual and utopian goals. His collection would come to include numerous works by Vasily Kandinsky, whose oeuvre epitomized this tendency, as well as paintings by such notable exponents as Rudolf Bauer, Robert Delaunay, László Moholy-Nagy, and Rebay herself. At the same time, Solomon actively sought work that did not fit the mold of non-objectivity—paintings by Marc Chagall, Albert Gleizes, Fernand Léger, Franz Marc, Amedeo Modigliani, Pablo Picasso, and Henri Rousseau. Today the collection of the Solomon R. Guggenheim Foundation includes approximately 620 artworks that were gifted to the museum by Solomon between 1937 (the year of the formation of the foundation) and 1949, or purchased by the foundation during those years. In order to formally honor his legacy, and in celebration of the 70th anniversary of the creation of the foundation, the Guggenheim is assigning a special credit line to these works, designating them as part of the Founding Collection. Approximately 65 works will be on view, offering a deeper understanding of the museum's origins, and insight into the vision of the museum's founders.
www.guggenheim.org