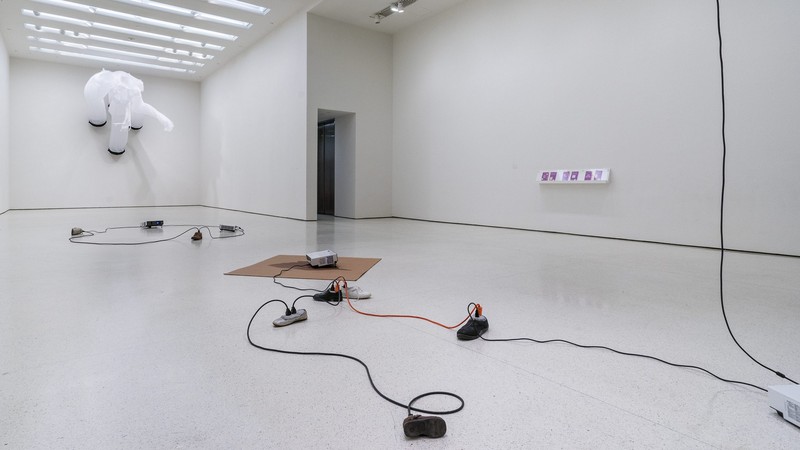 Paul Chan is the winner of the 2014 Hugo Boss Prize, a biennial award honoring artists who have made a visionary contribution to contemporary art. Over the past fifteen years, Chan’s wide-ranging projects have taken the shape of documentary videos, animated projections, charcoal drawings, conceptual typefaces, and public performances. In 2010 he founded Badlands Unlimited, an experimental publishing enterprise that has become an integral element of his work. Conceived to “make books in an expanded field,” Badlands has produced titles as GIFs, PDFs, and even a stone tablet, in addition to print and e-book formats.

In a similar spirit, the works in this exhibition consider what it might mean to make images in an expanded field, probing the notion of visual projection. Tetra Gummi Phone (2014–15) presents a moving image in material form. Described by the artist as a sculptural animation, this composition of white nylon fabric set in motion by industrial fans evokes an otherworldly apparition and draws on the ancient Greek concept of pneuma, meaning “breath” or “spirit.” An installation of works from Chan’s series Nonprojections (2013– ) features video projectors that are linked to jury-rigged, power-conducting shoes. Although the projectors’ lenses flicker and strobe as if outputting videos, there is no corresponding surface on which imagery might appear. Holding their contents within, these would-be projections remain illegible phantoms, replacing a passive experience of moving images with one that Chan characterizes as “inner-directed, like the ghostly visual impressions that one conjures up in one’s mind when reading a good (or bad) book.” The seemingly absurd titles of the individual works play on the names of Greek philosophers including Socrates and Plato, suggesting a link to the allegory of the cave—a parable of human perception that exhorts us to acknowledge the illusion of sensory information and embrace a truer understanding of reality.
On the occasion of this exhibition, Chan premieres a Badlands series titled New Lovers. Inspired by Maurice Girodias’s radical Olympia Press—founded in Paris in 1953 as a platform for censored works by such authors as Samuel Beckett, William S. Burroughs, and Vladimir Nabokov—New Lovers presents fiction by emerging writers working in the genre of erotica, a literary form with the potential to stir imaginings powerful enough to animate the body.

Paul Chan and Badlands Unlimited
Rendering of the book How to Train Your VirginArtist Paul Chan launched the experimental publishing enterprise Badlands Unlimited in 2010 after a multi-year break from art making. Today, Chan runs Badlands with fellow artists Ian Cheng, Micaela Durand, and Matthew So. Operating under the motto “we make books in an expanded field,” the press publishes works by artists and writers that cross-pollinate media and genres, producing print versions of many of its titles along with enhanced digital versions. Continually conceiving new possibilities for what might constitute a book, Badlands has published GIF compilations, handmade zines, and even a stone book, Holiday.

Chan launched Badlands by publishing some of his own writings, and has since published more than thirty titles by a wide variety of authors. On the occasion of Chan’s exhibition at the Guggenheim, The Hugo Boss Prize 2014: Paul Chan, Nonprojections for New Lovers, on view March 6–May 15, 2015, Badlands is launching a new series featuring emerging writers working in the genre of erotica. The series, entitled New Lovers, is inspired by the radical publisher Olympia Press. Founded in 1953 in Paris by Maurice Girodias, Olympia provided an early platform for the likes of Henry Miller and Vladimir Nabokov, and often published work that had been censored elsewhere. Echoing the text-only covers of one of Olympia’s series, the books that comprise New Lovers—also available as e-books—have purple all-text covers.
Three publications by Badlands UnlimitedBadlands published its first erotic novel, Fires of Siberia, by Tréy Sager, in 2013, and the ongoing New Lovers series signals the publisher’s renewed dedication to the genre. How to Train Your Virgin, by Wednesday Black, takes place in a medieval fantasy world where a queen attempts to deflower the human virgins her king desires. We Love Lucy, by Lilith Wes, centers on a woman who becomes obsessed with watching the sexual encounters between her best friend and his boyfriend. The protagonist of God, I Don’t Even Know Your Name, by Andrea McGinty, is an artist navigating the art world—and the men who run it.

The New Lovers books are a central component of Chan’s exhibition. Prototypes of the three books are on view in the exhibition space, and the paperbacks are available in the Guggenheim’s online store and at special displays within the stores in the museum. In conjunction with the release of the New Lovers series, the Guggenheim hosted a book launch on March 10, 2015. Each of the three authors read an excerpt from her book, followed by a conversation moderated by Chan and a book signing.
www.guggenheim.org