The Shapes of Space 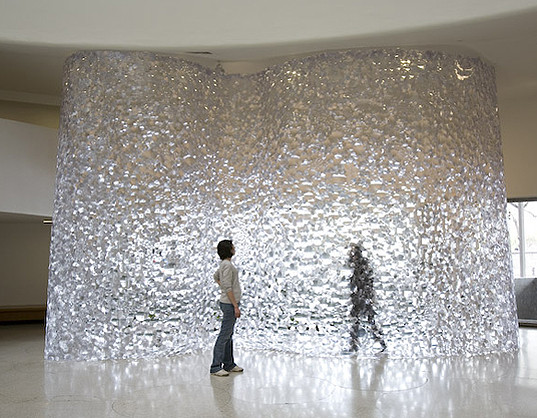 Space is one of the basic elements in art, and yet also one of the most resistant to definition. Almost all artworks take up, contain, describe, or create space—but as an abstract concept informed by larger systems of comprehending the world around us, whether mathematical, physical, metaphysical, spiritual, or political, our understanding of space has taken innumerable forms throughout history and in different cultural contexts. Since the early twentieth century, however, artistic conceptions and representations of space have multiplied across a wide range of media. Following the early avant-gardes' revolutionary break with the Renaissance tradition of linear perspective, artists felt a new freedom to investigate not just pictorial representations of space, but the physical space in which our bodies move, as well as the social realities it engenders—a freedom that persists in art being produced today.

The Shapes of Space draws from the Guggenheim Museum's permanent collection to explore these approaches to the elastic notion of space. Rather than seek a continuous, chronological art historical narrative, the exhibition positions itself as an open-ended inquiry, structured around several distinct thematic clusters: the delineation and perception of space; the activation of social space; the built or architectural space and its socio-political implications; psychologically charged spaces; invented or imagined spaces; and the idea of spiritual or infinite space. Since nearly all space is tied up simultaneously with the social, political, and psychological, these themes circulate throughout all sections of the exhibition, intersecting through unexpected juxtapositions that reveal surprising affinities among the works on view.

Conceived in response to the ongoing restoration of the Guggenheim's most iconic space, the Frank Lloyd Wright rotunda, The Shapes of Space opens in stages throughout the spring and summer, beginning with the rotunda floor and moving upward from the lower rotunda levels. This open-ended structure echoes the dynamic nature of space itself, foregrounding the museum as a site of continual transformation.