The Sweeney Decade: Acquisitions at the 1959 Inaugura 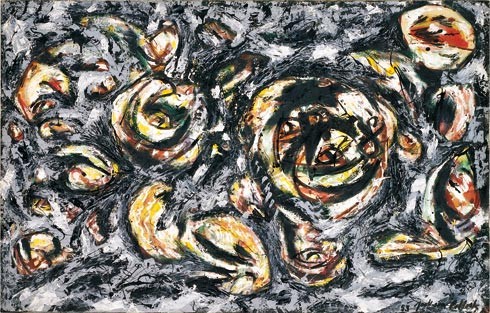 When the Guggenheim Museum first opened its doors in October 1959, the Frank Lloyd Wright rotunda was filled with a selection of more than 120 works from the permanent collection. While the exhibition represented, to a limited extent, the Guggenheim’s history as the former Museum of Non-Objective Painting with works by Vasily Kandinsky and other modernists, the inaugural presentation also included 40 works dating from the 1950s. Drawn from the contemporary paintings and sculpture acquired by director James Johnson Sweeney during his tenure from 1952 to 1960, The Sweeney Decade: Acquisitions at the 1959 Inaugural features examples of international postwar trends in abstraction including Abstract Expressionism, CoBrA, Tachisme, and Art Informel, by artists Karel Appel, Alberto Burri, Eduardo Chillida, Willem de Kooning, Jimmy Ernst, Hans Hartung, Jackson Pollock, Pierre Soulages, Antoni Tapies, and others.
Sweeney was known to be critical of Wright’s building design as well as the efforts of the museum’s first director, Hilla Rebay. He had the interior walls painted white (in opposition to Rebay’s preference that they be fabric covered), removed canvases from their oversized frames, and added sculpture— including a group of important pieces by Constantin Brancusi—to the collection that at that time was focused on paintings. Sweeney acquired works by vanguard painters working in New York—Abstract Expressionists such as William Baziotes, James Brooks, Ernst, de Kooning, and Pollock—whose work emphasized the emotional aspect of abstraction. He also looked to Europe to find artists who were breaking with traditional composition through gestural and spontaneous means, acquiring examples of the diverse trends of Art Informel (from the French informe, meaning unformed or formless) that proliferated in the 1950s. To this already international mix of abstraction, Sweeney added to the collection, for the first time, works by Asian artists.
The vision that Sweeney presented in the 1959 inaugural exhibition demonstrated the museum’s ability to embrace art that was new and challenging. By including a robust selection of works from the 1950s, made after Solomon R. Guggenheim’s death in 1949, Sweeney in fact remained faithful to the museum’s commitment to innovation championed by its founders. In March 1960, months before he resigned from the Guggenheim, Sweeney published an article titled “New Directions in Painting” in the Journal of Aesthetics and Art Criticism. There he made the case that in contemporary art, constant change should be seen as an assurance of integrity rather than a sign of fickleness, and that it is the “artist’s business” to be original: “Actually, this so-called ‘instability’ in the art of our period is its health. It is the sign of life in it, a sign of that constant urge to refreshment which, only, will keep the language of art alive.”
This exhibition is generously supported by Rudolph and Hannelore B. Schulhof.
Takeo Yamaguchi, Work - Yellow (Unstable Square [Fuantei shikaku]) (1958) was restored for this exhibition with the support of Naoto Nakagawa and Caroline Press.
—Tracey Bashkoff, Associate Curator for Collections and Exhibitions
www.guggenheim.org