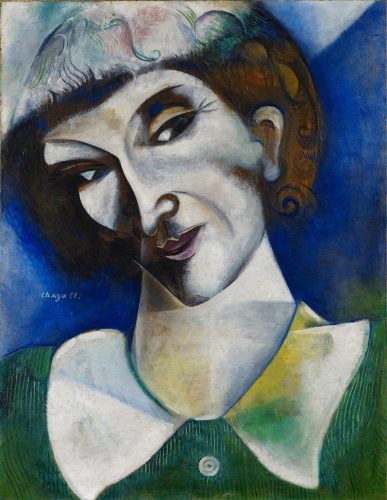 “Art seems to me to be above all a state of soul.” —Marc Chagall, My Life

When we approach the work of Marc Chagall, we are entering an apparently simple universe that encloses a complex reality, since the artist forges sophisticated links between worlds that might seem at first to be diametrically opposed, but which he began from the year 1911 to regard as complementary.

Born in 1887 into a family of Hasidic Jews (a movement within Judaism) in the small town of Vitebsk, then under the dominion of Tsarist Russia, Chagall grew up in a constrained atmosphere where access to Russian art and culture was limited both by his religion and by the policies of the time, which confined the Jews to ghettoes and deprived them of their rights. He soon broke away from established practice, first by entering a Russian school, then by studying art with Yuri Pen in Vitebsk, and finally, and most significantly, by moving to Saint Petersburg, a great city which Jews could only enter with a special pass. When the young Marc Chagall, encouraged by Léon Bakst, settled in Paris in 1911, it marked a watershed in his production. Until May 1914, the artist worked in the French capital on various pieces that combined his memories of life in the Hasidic community of Vitebsk with icons of the modern metropolis. Reminiscences of popular Russian art and his own culture are fused with the most advanced stylistic experimentation to be found in the Parisian avantgarde and some of its leading figures, such as Pablo Picasso, Robert and Sonia Delaunay, or Jacques Lipchitz.

Returning home in 1914 to attend his sister’s wedding and rejoin his fiancée, Bella Rosenfeld, Chagall was caught there by the outbreak of World War I, and forced to remain for eight years. This led him to a phase of self-searching that is reflected in many of the paintings and works on paper he produced in those years. The artist made numerous self-portraits, scenes of his daily life with his wife Bella and his daughter Ida, and drawings of the ravages of war, of life in his community, and of a new Russia. After the Revolution, Chagall was appointed Commissar of the Arts in Vitebsk, which gave him authority over its museums and art schools, and over the artistic events held in the region.

The exhibition is organized by Kunstmuseum Basel in collaboration with Guggenheim Museum Bilbao
www.guggenheim-bilbao.es