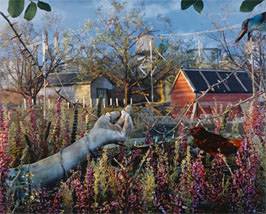 On view at the Guggenheim Museum Bilbao from 25 November, Speaking with Hands. Photographs from The Buhl Collection is an exhibition of nearly 170 photographs devoted to the subject of hands. The Buhl Collection demonstrates the prevalence of the hand as a photographic theme, a result, in part, of photography's easy ability to capture fragments and detail, as well as ephemeral movements.

The works are drawn from the extensive collection of well-known philanthropist Henry M. Buhl, who, after 30 years as an investment broker, gave up his job and set up in New York's SoHo to concentrate on photography. An active participant in many art institutions, Henry M. Buhl is also a Member of the Photography Committee of the Solomon R. Guggenheim Museum in New York, and his own Foundation awards a two-year grant for excellence in photography. Henry Buhl has also received the highest public recognition for his social commitment as founder and leader of the Partnership organization, which works to return dropouts and the underprivileged to mainstream society through a highly successful vocational training program.

In the exhibition, the hand is depicted both literally, in the context of portraiture, for example, as well as figuratively, in terms of hand gestures captured in documentary images. Spanning the history of the photographic medium, the exhibition encompasses a comprehensive range of photographic practices, including scientific, journalistic, and fine-art photography, with a strong component of contemporary art.