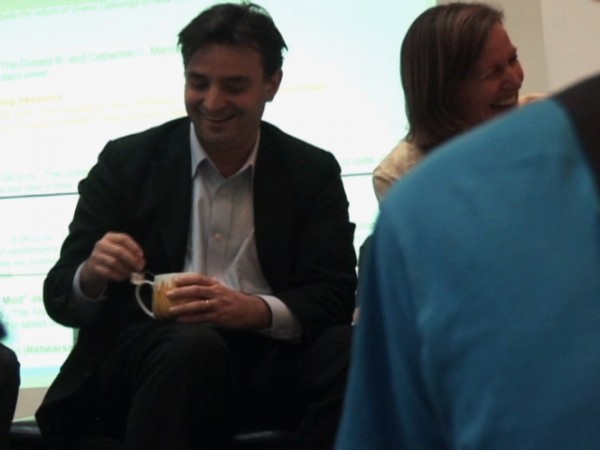 Practically wanting to be turned on every time they left to the house, Cass and Sinon went off to the shows and they never came back. Outside is the revolution, with its festivals, trailers, copious applications, the necessity of a detailed script, contracts, insurance policies. Inside, a bell comes twice: the sound of the humidity register in the corner reminding everyone present they have to be wetter. Cass and Sinon are the only ones left inside. That’s how they explain to themselves why they’re still here. The truth is there was never anyone else. Realignments with the world have been slow since they unplugged, manually upping their own latencies.

An antechamber, first, three things: a marble head of Athena, a Laocöon group, and between them a small brass on a cubic meter of red marble. And a ticket counter of course, where they stick their hands into the goldfish bowls full of admission pins and each take one, for appearances. The marble head of Athena looks on impassively, shadow from the skylight above cutting her face in half. The Laocoeon group, a paraplastic hentai adaptation of the type popular at the beginning of the last century, shudders slightly, its snakes sliding across one another to grip its arms and legs a little tighter.

Sinon – always a bit of a pussy (Cass thinks) – says, “Do you think we’re at risk in here, Cass?” Cass says nothing but presses a pin into the middle of his forehead, over his Ajna, and the other on the tip of a finger deep inside herself, until the flat “F” is flush with her ectocervix. “I never had a high latency period,” the marble head of Athena thinks audibly, adding for their benefit, “but this is one way to think about art: life with really bad lag, pinging you with its 2400 bps.”

Cass flexes her arms backwards on an edge to lower herself onto the butcher’s block of marble and lean her back against the brass. “I hope you’re feeling yar in your hips,” Athena says drily. “To continue with the walkthrough, the second object in this room, the group now behind you is pinging at exactly the rate I described, stemming from an era when disgraced corporate officers were repurposed to create additional value via a slowdown into paraplastic lobby and boardroom sculpture.”

Cass doesn’t care, singing to Sinon. “You get so wet on thoughts I bet your thoughts are hot my thoughts are not not hot.” Athena sighs. “But of what did you think thought capable that you now perceive its empower?” The snakes slide against one another around each member of the group’s upper thighs.

Son: A chrome agon ist nicht “war” in interior disco night.
Son: Is the form or the content of your desire what is problematic? Allow an adjustment to happen wordlessly.
Laocöon: Oh fuck fuck fuck.
Son: He’s been that way since right before the grand opening.
Son: Up shit creek in a toilet paper boat.

Sinon’s tongue curls up inside Cass, its tip hitting a metallic tang that makes him gape and inhale sharply, pushing the muscle up further inside her against the admission pin.

“The third object in this room,” Athena says sharply, “in which you have come to inspire yourselves, is a brass statuette of Nessus’s rape of Deianira. The centaur caught rearing on his two hind legs, his bowed face forward with effort, so one knows the front legs will momentarily pound the ground in the second half of a gallop, the force of that concentration on his prize.”

With come flooding over and around his eyes Sinon beats Cass’s rigid, spasming right thigh with his right hand, the bellowing echo momentarily drowning out Athena, while his other pulled hard on her left ankle as if ringing for service.

“Clasped to his back,” Athena continues more loudly. “But unlooked for, she stretches one hand to the gods, a leg bent with a tensed ankle planted on Nessus’s haunch.”

Cass kicks her foot free of his hand, planting her heel in the middle of the small of his back and presses Sinon in at a gasp, gagged on the tip of his tongue.

“It is by Adriaen de Vries and well worth seeing.”