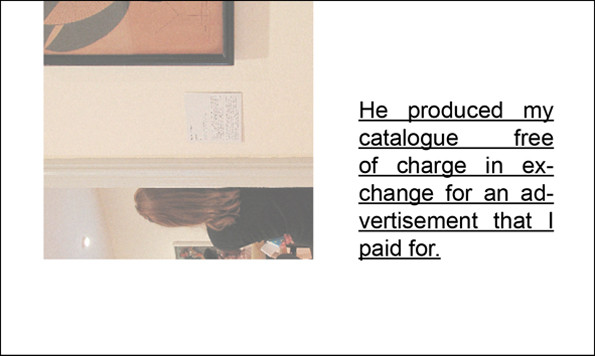 A boy and a girl in summer clothes at the Palazzo Venier di Leoni in Venice are the main protagonists of a series of photographs on view in the exhibition "Bodies in the Backdrop". In addition to the two adolescents, the photos depict details of the space and other visitors, captured between fragmentarily photographed artworks and interior views of the Peggy Guggenheim Collection. On the passe–partouts are excerpts from "Confessions of an Art Addict" (1946), the memoirs of the gallerist, collector and patron, Peggy Guggenheim. The citations, that don't mention any dates, names or locations, turn into contingent fragments of sentences through the decontextualization, with the surprisingly contemporary everyday language easily bridging the distance between the decades.

The framed photographs are contrasted by a second and equal part of the exhibition, which – like the sentence fragments – defines the photographs and at the same time dialogically opens up a wide range of narratives and allusions: a kind of eccentric and simultaneously minimalist display composed of Perspex constructions, a red carpet and a temporary exhibition wall.

The title of the exhibition, "Bodies in the Backdrop", is drawn from the eponymous text by Elisabeth Lebovici on the "agent d ́art", Ghislain Mollet-Viéville, a French collector, whose lifestyle, self-presentation and practice of marketing his collection of Minimal and Conceptual art Tobias Kaspar has dealt with for a period of time. As in his examinations in earlier projects, the reference to a person in the "body of work" at Halle für Kunst is not intended to be biographic or hagiographic. The specific reference is utilized as an abstract model, as material, in order to address the social, affective and economic relationships of tension between collectors and other actors in the field of art.

An interest in forms of desire, economies of visibility, practices of representation and marketing, is combined with considerations on the opposition between autonomy, not least secured by the judgement of peers, and heteronomy, for example market dominance and popularity. However, with this interest in relationship networks in the art field, Kaspar focuses less on institutional framework conditions, but instead casts a view vacillating between intimacy and cool reserve to the actors themselves.