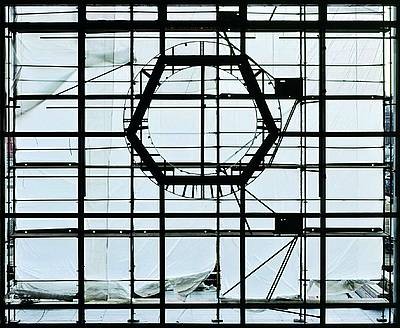 To coincide with the exhibition by Tomás Saraceno in the gallery's historical central hall, an array of sculptures, photographs, film works and paintings will be on show in the Rieckhallen that all in some way bear references to architecture.

The thematic exhibition features works from both the Friedrich Christian Flick Collection and the Nationalgalerie's own collections and is enriched by a few select loans. Together, these works illustrate the diverse ways in which artists have worked at the cross-roads between art and architecture since the 1960s. The sculptures, pictorial spaces and spatial constructions created in the art on display here borrow from architectural forms and reflect and comment on common practices in the design of buildings and urban spaces. They primarily focus on the plastic and sculptural qualities of architectural structures, without loosing sight of the social and economic implications of the constructed world we inhabit. The works unlock the door on imaginary spaces, stir memories of well-known buildings or revive various visions of the future that may now seem dated.

Four visionary architects once active in Germany are featured in the display cases situated between halls 2 and 3. These include Bruno Taut and Wenzel Hablik, with their designs for crystal and domed buildings dating from the early modernist period, as well as Frei Otto and Ludwig Leo, who in their own way combined functionalism with a pictorial quality in the architecture of the second half of the last century. This parallel display helps illustrate the importance of visionary architecture on the dialogue between art and architecture over the course of the 20th century.