Beyond Cinema: The Art of Projection 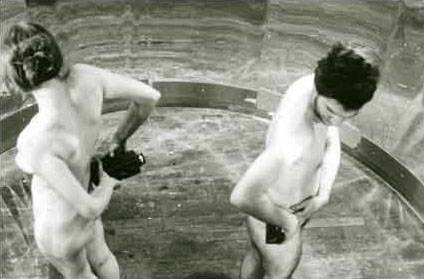 BEYOND CINEMA: THE ART OF PROJECTION
FILMS, VIDEOS AND INSTALLATIONS FROM 1963 TO 2005
Works from the Friedrich Christian Flick Collection im Hamburger Bahnhof, from the Cramlich Collection and others
29 September 2006 - 25 February 2007

Wherever we go, we are constantly surrounded by moving images. In art, too, they have long since developed a life of their own: “beyond the cinema” the conventions of viewing film in dark auditoriums are undermined as images are projected freely onto walls, set side by side in multiple projections, arranged as walk-in installations and conceived as stagings in specially-designed architectures.

The exhibition centers around the major film and video installations of the 1990s, the ravishing projections by the Swiss artist Pipilotti Rist, Bruce Nauman’s existentialist image of the body, the psychologically-charged film spaces of Eija-Liisa Ahtila from Finland and the highly conceptual installations of Canadian Rodney Graham. These contemporary works from the Flick Collection in the Hamburger Bahnhof elaborate artistic notions of the projected image that were developed in the 1960s. Groundbreaking works such as the films of Marcel Broodthaers, the American Dan Graham or the experimental filmmaker Valie Export can be viewed in dialogue with contemporary works. With six extensive thematic sections such as “Phantasmagoria”, “Body Double” and “Repertory Cinema”, the exhibition will outline the significance which the art of projection has achieved outside the cinema. At the same time, it shows what subject matter, techniques and conceptual notions have shaped this form of media art to the present day. Ultimately, the art of projection is a school of perception, offering an extraordinary experience of filmic effects such as light, shadow, motion, sound and reflection.

The exhibition is curated by Gabriele Knapstein and Joachim Jäger

(both from the Hamburger Bahnhof) in collaboration with the Canadian artist Stan Douglas and the curator of the Kramlich Collection (San Francisco), Christopher Eamon.

Parallel to the exhibition, Kino Arsenal will screen films, and a scholarly symposium will be held.

Accompanying the exhibition, a German-English catalogue of approx. 160 pages with around 100 illustrations will be offered for approx. 20 euros. It will include texts by Stan Douglas, Christopher Eamon, Anette Hüsch, Joachim Jäger and Gabriele Knapstein, among others.