Cult of the Artist: "I can't just slice off an ear every day" 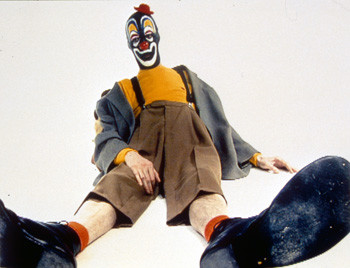 CULT OF THE ARTIST: "I CAN'T JUST SLICE OFF AN EAR EVERY DAY"
DECONSTRUCTING THE MYTH OF THE ARTIST. WORKS FROM THE FRIEDRICH CHRISTIAN FLICK COLLECTION IN THE HAMBURGER BAHNHOF, THE COLLECTIONS OF THE NATIONAL MUSEUMS IN BERLIN AND OTHER COLLECTIONS
3 OCTOBER 2008 - 22 FEBRUARY 2009

The image and the idea of the autonomous, creative artistic genius was subjected to a variety of attacks by the avant-garde movements of the early 20th century. Since the 1960s, many artists have taken critiques of the heroic image of the artist even further, often radically questioning a conception of art that is oriented toward the autonomous work.

Influenced to some extent by the discourse of the "death of the author" and paralleled by a critical confrontation of art as an institution, artists have interrogated and deconstructed a range of stereotypes associated with an often masculinized ideal of creative genius.

In the process, conventional models of authorship have been critically scrutinized, along with traditional notions of masculine and feminine creativity. At times humorously, at times sarcastically, at times even destructively, the status of the artist within the art world has been the object of sustained reflection, and categories such as authenticity and subjectivity interrogated.

A variety of approaches to deconstructing the myth of the artist since the 1960s have foregrounded the ambivalence of the artist's perennial role, located between decomposition and affirmation, and have provoked discussion of the societal expectations of the artistic personality. On display will be works by - among others - Azorro, Marcel Broodthaers, Marcel Duchamp, Maria Eichhorn, Andrea Fraser, Rodney Graham, Martin Kippenberger, Sarah Lucas, Bruce Nauman, Ugo Rondinone, Ed Ruscha, and Sturtevant. Works have been drawn from the Friedrich Christian Flick Collection in Hamburger Bahnhof, the collections of the Staatliche Museen zu Berlin, and other collections.
www.smb.museum/museen-einrichtungen/hamburger-bahnhof/home.html