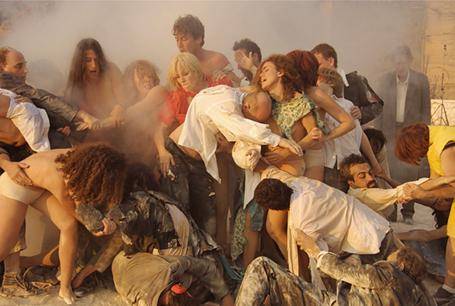 
ABOUT THE RAPE OF THE SABINE WOMEN

Conceived as allegory based loosely on the ancient myth that follows Romulus’ founding of Rome and inspired by Jacques-Louis David’s Intervention of the Sabine Women, the Rufus Corporation’s Rape of the Sabine Women is a riff on the original story of abduction and intervention, in which Romulus devises a plan to ensure the future of the empire. The Rufus Corporation has re-envisioned the myth as a 1960’s period piece with the Romans cast as G-men, the Sabines as butchers’ daughters and the heyday of Rome allegorically implied in an affluent international style summer house.

The Rape of the Sabine Women was shot on location in Athens and Hydra in Greece and in Berlin, Germany in 2005. The projection and sound installation opens at The Hamburger Bahnhof-Berlin on January 25th, 2007 and will run for six weeks. The Rape of the Sabine Women opens in New York City for one week on February 21, 2007 running through February 28th at the IFC Center Cinema, generously presented by Creative Time.

Conceived in an operatic five act structure the film opens in Berlin’s Pergamon Museum where the men meet a speechless soothsayer in the form of a museum guard. They learn their fate via tour headsets that relay hypnotic electronic sounds. In the S-Bahn (Nordbahnhof) the men hear women’s voices. The women appear as mirages – figments of a collective imagination. In Act II, the convention is completed in Tempelhof Airport, played out by the men moving in unison to the click of taps and strains of bouzouki. The 3rd Act culminates with the men carrying out their charge, stealing women in the modern Agora – the meat market in Athens. The piece turns on Act IV where our protagonists appear living in a classic modern 60’s dream house overlooking the Aegean. The implication of ‘better living through design’ is the paradoxical backdrop to the relationships that begin to unravel within the wrenching perfection. The inhabitants of the house become estranged. Infidelity is implied. The men, who initially came together to steal from strangers, take from each other. The women become the dominant players. In the final Act at the Herodion Theatre – the site of a massive chorus lead by Jonathan Bepler – the tension borne in the house erupts. A fight becomes a riot. The intervention of the women is fraught. The chaos that ensues does not end, but transforms the designed perfection into nothingness.


© Eve Sussman & The Rufus Corporation
Disintegration at Hydra
Photographic still from “The Rape of the Sabine Women”, 2005 Photo by: Ricoh Gerbl
www.smb.museum/museen-einrichtungen/hamburger-bahnhof/home.html