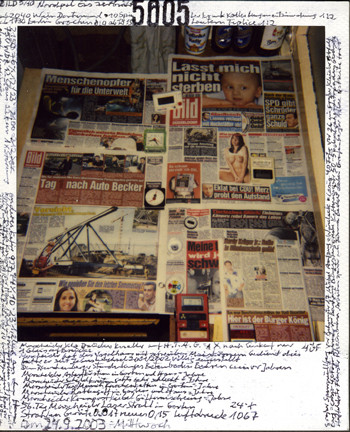 With Secret Universe, Hamburger Bahnhof begins a series of exhibitions focusing on artists who have so far remained largely neglected by the established art discourse. The first exhibition in this series is devoted to Horst Ademeit.

This artist has devoted more than 20 years of his life to the photographic documentation of what he called "cold rays" and other invisible radiation that he thought harmed him and his environment. In the complex reference systems developed by Ademeit, certain motifs play a constant role: electricity meters, peepholes, building sites, electric cables, collections of bulky trash or bikes. Ademit began to cast the flood of images he produced in a concrete form in October 1990: he arranged measuring instruments and a compass on a newspaper and photographed them with a Polaroid camera. Over the course of 14 years, he made 6006 numbered Polaroids.

Born in Cologne in 1937, Horst Ademeit first trained as a house painter, and then studied textile design before joining the Werkkunstschule in Cologne. In 1970, he was a student of Joseph Beuys for a short time. His first documentary photographs were taken during renovation work in run-down houses. From the end of the 1980s, the artist concentrated on the documentation of "cold rays." His oeuvre was discovered and exhibited for the first time in 2008. He died in July 2010. The exhibition at Hamburger Bahnhof is Horst Ademeit's first museum show.

The series Secret Universe has been made possible by the About Change Stiftung.
www.smb.museum/museen-einrichtungen/hamburger-bahnhof/home.html